I know everyone is probably very busy with the holidays, so today’s post is going to be a short one! I am having computer problems again and I’m not able to put on a lot of photos of Alonzo Clemons , a very talented artist. Please watch the video above to see more of his amazing sculptures!

Alonzo Clemons is primarily known as a sculptor but his creative talents, interests and influences go way beyond the obvious. In addition to his obvious love for large hoofed animals, he also loves classic rock, superhero movies and power lifting.

Alonzo has what is known as Savant Syndrome, a descriptive term applied to individuals who have both a developmental disability and a spectacular, genius-level skill in a specific area. Alonzo’s skill is in the area of  sculpture. When Alonzo is given a piece of clay to work with his hands take over, there is a drive to create but also the subtle command of an artist who has worked with thousands of pieces of clay over the year.

VSA Colorado/Access Gallery is proud to host a show of Alnonzo’s work. In addition to the sculptures he is so known for we are also pleased to be presenting several of his paintings.  In addition to the openings at the gallery Alonzo will be at Access Gallery on Saturday January 23rd for a demonstration and discussion of his work. All events are free and open to the public.

Alonzo Clemons is an artist with a remarkable background. His sculptural specialty is the creation of animal figures, full of life and spirit, which are made with amazing speed, great accuracy in form and artistic beauty. While much was lost due to the injury, something miraculous also occurred, for as Clemons sometimes puts it, “God gave a gift.” He began showing a fascination with modeling materials and a tremendous inner drive to make sculpture. Even in situations where he did not have access to modeling clay, his determination to make models of animals was so great that he found materials in his environment that he could use for sculpting. For over twenty years he continued to practice his art in obscurity until the early 1980’s, when the movie Rain Man, which featured Dustin Hoffman in the role of a disabled man  with remarkable skills of memory, brought international media attention to a phenomenon known as the Savant Syndrome. Savant Syndrome is a descriptive term applied to individuals who have both a developmental disability and a spectacular, genius-level skill in a specific area. Clemons is recognized as one of the world’s prodigious savants and has been featured on programs such as 60 Minutes, Geraldo, and the Discovery Channel’s World of Wonder. This media exposure gave him the opportunity to gain worldwide recognition for his art. From his youth, Clemons had not only the genius for his art, but has shown an inner vision to become successful with it, and those dreams are truly continuing to unfold in his life.

Clemons competing at the Special Olympics Colorado state meet in 2003

His personal successes extend beyond his art,for he has a rich and active lifestyle in his community of Boulder, Colorado. He lives in his own home with some assistance, and works part time on jobs in the community, in addition to doing his work as a sculptor. Seeking to inspire children’s creativity, he demonstrates his sculpting at schools in the area. Other personal interests include power lifting, in which he competes at the Special Olympics, and visiting the animals he enjoys so much at the Denver Zoo, the National Western Stock Show, as well as local farms and ranches. His radiant personality touches all who know him.

Clemons works in wax and clay, using only his hands and fingernails to create his sculptures. Joy radiates from him as he sculpts. 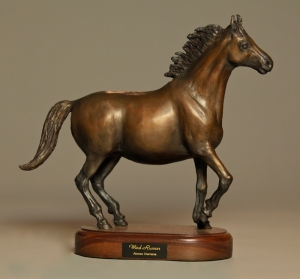 Gifted Hands is the Official Representative of Alonzo Clemons
To order these sculptures contact
Nancy Mason at: