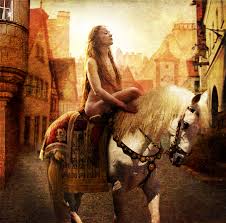 Remember  last Friday’s post , when I told you it would be a sweet one? Well, today’s is on Lady Godiva. I read an interesting article on the Lady Godiva Chocolates and thought I would share it with you and some  art depicting her and her horse!

The story of Lady Godiva’s naked ride through the streets of Coventry has been a cornerstone of British folklore for 1,000 years.

But no a Belgian chocolate manufacturer has sparked outrage by claiming it has exclusive rights to both her name and the famous image of her on top of a horse.

The situation was exposed when lawyers acting for the confectionery giant fired a warning letter to a pub called The Lady Godiva last week, warning that it was infringing on its ‘intellectual property’.

Owner Glen Simons was given a 90-day ultimatum to change his bar’s name and remove all references to the 11th Century noblewoman, whose daring protest at oppressive taxes has become the stuff of legend.

Historians reacted with shock that her name had been allowed to fall into the hands of a foreign firm without anyone apparently noticing.

Colin Walker, vice-chairman of the Coventry Society, said: ‘This is an absolute travesty. No one should be allowed to hijack the identity of historical figures for their own commercial interests.

‘When I was in Belgium recently I thought it was a bit of a cheek that they were selling chocolates with Lady Godiva on the box, but I never thought it would come to this.

The Mail on Sunday has discovered that Godiva Chocolatier successfully filed a patent on Lady Godiva’s identity in 2007. It appears on the register of the Intellectual Property Office in London, the official body for trademark applications, alongside several versions of the woman-on-a-horse image.

Legal experts said it would have been relatively easy for the company to stake its claim for a fee of about £1,000. It would have no obligation to consult interested parties before going ahead.

‘If the Belgians try to enforce this in Coventry, there will be angry protests. We are very proud of Lady Godiva, and she is known and loved around the world.’

I’m sure that the English must be very  angry and especially  since they created a 20 foot tall puppet for the 2012 London Olympics.   See the photos of this very unusual Lady Godiva at the bottom on my post !

Here are some paintings of her and her horse! 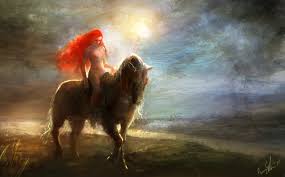 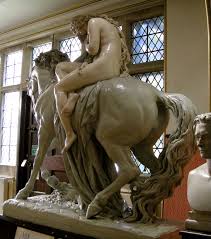 Created for: 2012  The London Olympic Games

This is just a small amount of art that people have depicted Lady Godiva though out the the ages. I wonder if we will see another Lady Godiva riding her horse down the streets of   Coventry in protest  not of taxes but of  her English heritage and her right  to remain English.  I  want to follow this  bittersweet  event! Come back and I will keep you updated  ~