I decided to  feature Currier and Ives and their Equine lithographs!  I learned a lot from this post, and  I hope you do too!!

A few a the winter scene  that I included in this post are also in my “Merry Christmas! post as well. If you would like to see it, you can here:  https://artofthehorse.wordpress.com/2014/12/24/merry-christmas

In 1833,  Nat Currier left Boston and moved to Philadelphia to do contract work for M.E.D. Brown, a noted engraver and printer. With the promise of good money, Currier hired on to help Brown prepare lithographic stones of scientific images for the American Journal of Sciences and Arts. When Nat completed the contract work in 1834, he traveled to New York City to work once again for his mentor John Pendleton, who was now operating his own shop located at 137 Broadway. Soon after the reunion, Pendleton expressed an interest in returning to Boston and offered to sell his print shop to Currier. Young Nat did not have the financial resources to buy the shop, but being the resourceful type he found another local printer by the name of Stodart. Together they bought Pendleton’s business.

The firm ‘Currier & Stodart’ specialized in “job” printing. They produced many different types of printed items, most notably music manuscripts for local publishers. By 1835, Stodart was frustrated that the business was not making enough money and he ended the partnership, taking his investment with him. With little more than some lithographic stones, and a talent for his trade, twenty-two year old Nat Currier set up shop in a temporary office at 1 Wall Street in New York City. He named his new enterprise ‘N. Currier, Lithographer’.

Nathaniel continued as a job printer and duplicated everything from music sheets to architectural plans. He experimented with portraits, disaster scenes and memorial prints, and any thing that he could sell to the public from tables in front of his shop.

Nat met and married Eliza Farnsworth in 1840. In 1841, Nat and Eliza had their first child, a son they named Edward West Currier. That same year Nat hired his twenty-one year old brother Charles and taught him the lithography trade, he also hired his artistically inclined brother Lorenzo to travel out west and make sketches of the new frontier as material for future prints. Charles worked for the firm on and off over the years, and invented a new type of lithographic crayon which he patented and named  “Crayola”. Lorenzo continued selling sketches to Nat for the next few years.

In 1843, Nat and Eliza had a daughter, Eliza West Currier, but tragedy struck in early 1847 when their young daughter died from a prolonged illness. Nat and Eliza were grief stricken, and Eliza, driven by despair, gave up on life and passed away just four months after her daughter’s death.

The subject of Nat Currier’s artwork changed following the death of his wife and daughter, and he produced many memorial prints and sentimental prints during the late 1840s. The memorial prints generally depicted grief stricken families posed by gravestones (the stones were left blank so the purchasers could fill in the names of the dearly departed). The sentimental prints usually depicted idealized portraits of women and children, titled with popular Christian names of the day.

Late in 1847, Nat Currier married Lura Ormsbee, a friend of the family. Lura was a self-sufficient woman, and she immediately set out to help Nat raise six-year-old Edward and get their house in order. In 1849, Lura delivered a son, Walter Black Currier, but fate dealt them a blow when young Walter died one year later. While Nat and Lura were grieving the loss of their new son, word came from San Francisco that Nat’s brother Lorenzo had also passed away from a brief illness. Nat sank deeper into his natural quiet melancholy. Friends stopped by to console the couple, and Lura began to set an extra place at their table for these unexpected guests. She continued this tradition throughout their lives.

In 1852, Charles introduced a friend, James Merritt Ives, to Nat and suggested he hire him as a bookkeeper. Jim Ives was a native New Yorker born in 1824 and raised on the grounds of Bellevue Hospital where his father was employed as superintendent. Jim was a self-trained artist and professional bookkeeper. He was also a plump and jovial man, presenting the exact opposite image of his new boss.

Jim Ives met Charles Currier through Caroline Clark, the object of Jim’s affection. Caroline’s sister Elizabeth was married to Charles, and Caroline was a close friend of the Currier family. Jim eventually proposed marriage to Caroline and solicited an introduction to Nat Currier, through Charles, in hopes of securing a more stable income to support his future wife.

Ives quickly set out to improve and modernize his new employer’s bookkeeping methods. He reorganized the firm’s sizable inventory, and used his artistic skills to streamline the firm’s production methods. By 1857, Nathaniel had become so dependent on Jim’s skills and initiative that he offered him a full partnership in the firm and appointed him general manager. The two men chose the name ‘Currier & Ives’ for the new partnership, and became close friends.

Currier & Ives produced their prints in a building at 33 Spruce Street where they occupied the third, fourth and fifth floors. The third floor was devoted to the hand operated printing presses that were built by Nat’s cousin, Cyrus Currier, at his shop Cyrus Currier & Sons  in Newark, NJ. The fourth floor found the artists, lithographers and the stone grinders at work. The fifth floor housed the coloring department, and was one of the earliest production lines in the country. The colorists were generally immigrant girls, mostly German, who came to America with some formal artistic training. Each colorist was responsible for adding a single color to a print. As a colorist finished applying their color, the print was passed down the line to the next colorist to add their color. The colorists worked from a master print displayed above their table, which showed where the proper colors were to be placed. At the end of the table was a touch up artist who checked the prints for quality, touching-in areas that may have been missed as it passed down the line. During the Civil War, demand for prints became so great that coloring stencils were developed to speed up production.

Although most Currier & Ives prints were colored in house, some were sent out to contract artists. The rate Currier & Ives paid these artists for coloring work was one dollar per one hundred small folios (a penny a print) and one dollar per one dozen large folios. Currier & Ives also offered uncolored prints to dealers, with instructions (included on the price list) on how to ‘prepare the prints for coloring.’ In addition, schools could order uncolored prints from the firm’s catalogue to use in their painting classes.

Nathaniel Currier and James Merritt Ives attracted a wide circle of friends during their years in business. Some of their more famous acquaintances included Horace Greeley, Phineas T. Barnum, and the outspoken abolitionists Rev. Henry Ward, and John Greenleaf Whittier (the latter being a cousin of Mr. Currier).

Nat Currier and Jim Ives described their business as “Publishers of Cheap and Popular Pictures” and produced many categories of prints. These included Disaster Scenes, Sentimental Images, Sports, Humor, Hunting Scenes, Politics, Religion, City and Rural Scenes, Trains, Ships, Fire Fighters, Famous Race Horses, Historical Portraits, and just about any other topic that satisfied the general public’s taste. In all, the firm produced in excess of 7500 different titles, totaling over one million prints produced from 1835 to 1907.

In 1902, faced will failing health from the ravages of Tuberculosis, Edward Currier sold his share of the firm to Chauncey Ives. In 1907, faced with competitive pressures from advancements in offset printing and photo engraving, Chauncey closed the venerable lithography business and sold the printing equipment and lithographic stones to his shop foreman, Daniel W. Logan.

Nathaniel Currier and James Merritt Ives are laid to rest along with their families at the Greenwood Cemetery in Brooklyn, New York~ 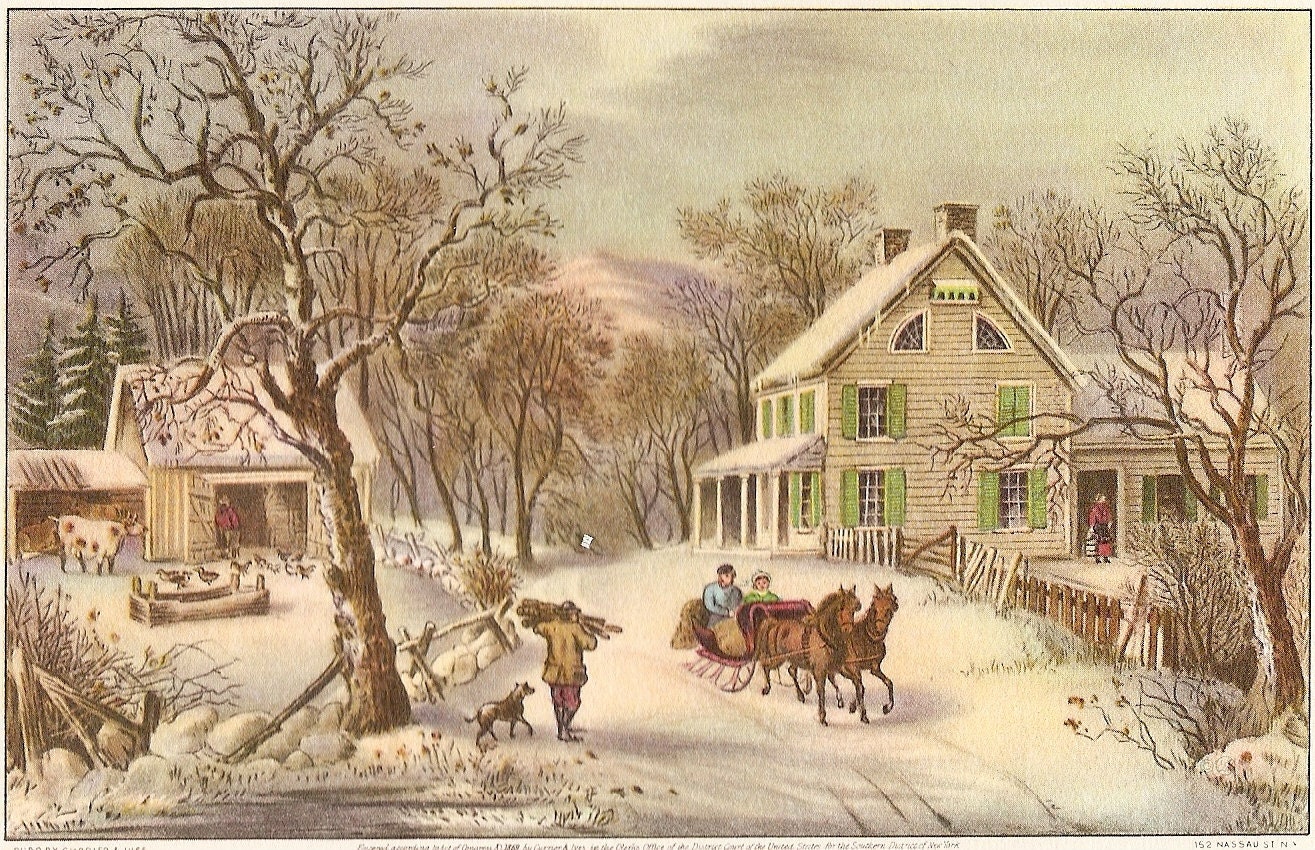 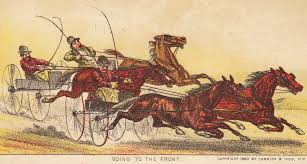 Hope you enjoyed today’s post!! I had no idea that “Crayola” Originated here!