“Having a WONDERFUL Time” by Norman Thelwell

My Favorite cartoon artist is Norman Thelwell and his Thelwell ponies! So, for this Tuesday I will be doing him! And, for next Friday, I will be doing a post on my friend  who lives in the Shetland Islands and does amazing pony photography!

Here we go with the Thelwells~

Norman Thelwell, an English cartoon artist is best known for his hilarious cartoons of VERY FAT “Thelwell” Shetland ponies and their riders (usually falling off, getting bucked off, yelling, screaming or crying at there ponies!)  His earliest surviving drawing is a pencil self-portrait done at the age of 10. As a child, he loved to paint and draw- ‘with drawing, the answer was always there in front of you – you only had to look’.

Norman Thelwell signed up for the army in 1941, and was art editor of an army magazine in New Delhi India. Through the years of war which followed, both in Britain and in India, he always traveled with his sketchbooks. The first cartoon he ever had reproduced was an Indian subject for the London Opinion. In 1945, at Nottingham Art School evening classes, he met a student Rhona, whom he married in 1949.

Known to many only as Thelwell, he found his true comic niche with  Pony Club girls and their comic ponies, a subject for which he became best-known, and which led to a cartoon strip about such a pair, Penelope and Kipper. His first collection of cartoons, Angels on Horseback, was published in 1957.

In total, Norman Thelwell has at least 22 comic books published ( mostly on Thelwells!), about 5 published books and one  autobiography~

Here is  the poster for James Herriot’s film, ‘All Creatures Great and Small’   that he did in 1975~ 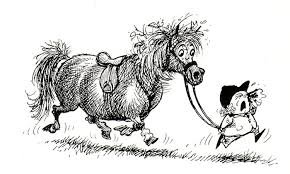 In 1979 the Post Office asked Thelwell to provide six horseracing designs for stamps.
They were the first ever cartoon stamps, but the PO lost their nerve and didn’t issue them – shame on them! They were used for a presentation pack instead. Wouldn’t it be cool if we had these to use now ?!