Laurel Anne Harte was born in the San Fernando Valley of California on Dec. 31, 1945. She grew up in a broken home; her father married three times, her mother twice. She said in an interview to The Marin Independent Journal in 1995 that as a girl she felt emotionally unstable and untalented. She found some measure of peace in playing the guitar, dancing and drawing.

She left home at 14 with only a paper bag of clothing, and she cleaned houses and cared for children in exchange for room and board. She dropped out of high school and went, “going around singing and playing the guitar,” she told The Los Angeles Times in 1986. Her husband said that she never took an art class.

At age 19, she married a jazz musician Robert Burch. Doctors strongly opposed birth, fearing that the baby may damage pelvic bones … but nothing happened. Laurel gave birth to a daughter, and after a while – a son. Marriage, however, soon fell apart, and Laurel became a young single mother. When she was pregnant with her second child, her son Jay, she was arrested for stealing a piece of meat from a supermarket, The San Francisco Chronicle reported in 2000; someone had told her she should be eating more protein.

Due to illness Laurel was forced to seek a job that would give her the opportunity to conduct acceptable to her health life. Laurel began creating jewelry – old coins, bones and beads turned into earrings and necklaces. When she put them on, she has a sense of belonging, even to the exotic world created by her own hands. Fascinated by her ornaments, people on the streets began to ask where she got them. Her creations have become bridges leading to the friends and customers. Jewelry by Laurel Burch began to spread across America.

At that time she began to paint – pretty childish, very brightly, without complying with the proportions, but  her drawings are a direct reflection of the hippie culture. In the world of Laurel there is no violence, cats make friends with the dogs, everywhere are flowers and trees. Laurel started receiving comissions from restaurants, her paintings were bought for private collections. Laurel’s work was noticed in China, she got several lucrative contracts for her art abroad. Her work was in demand, jewelry – sold throughout the country, thus began a brilliant career of Laurel Burch.

In China, she started working on a line of earrings. Laurel was the first American woman invited to China as an artist and a businesswoman.

Laurel was a self-taught artist. She saw herself as a folk artist, telling stories. “In our fast moving, changing world – she said – we need characters that would remind the constancy of the spirit world.” In some extent, the meaning of her work has always been to bring together the different cultures and talk about communication with the earth and all living creatures. These ideas are now becoming increasingly popular.

In ’61 Laurel broke her jaw … twice. For the first time, when yawning, in the second, when having dinner. After that she could no longer feed herself. She had to be fed through a special tube. However, she found the strength to joke: “It makes me even more silent …”.

Laurel has always worked incredibly fruitful. Even during long periods of illness, when she had to draw lying in bed or sitting in a wheelchair, she seldom put off brush aside. Laurel said: “I ​​refuse to have anything in my life that I could not turn into something magical and beautiful. I just refuse to. “Her art will always carry a sense of joy, passion and ease. Her illustrations have an inner strength with their bold lines, complex curves and uncontrolled explosion of colors. The universe of her imagination was fertile, blossoming, joyful, egalitarian. It was a place where every flower and dragonfly turned into something … magical and beautiful.

On September 13, 2007 Laurel Burch died of complications from bone diseases~

Before her passing, Laurel and her daughter, Aarin Burch, began collaborating on a film project documenting the journey, life, and art of Laurel Burch.

On August 29th, 2007, Laurel said “No one else could possibly create such a legacy when I am not any longer of this earth. The time to open my innermost life and world has come, and Aarin is the one who can so beautifully capture and preserve it as a piece of her own legacy.”

Here are some of Laurel’s fantastic and colorful horses! Enjoy~ 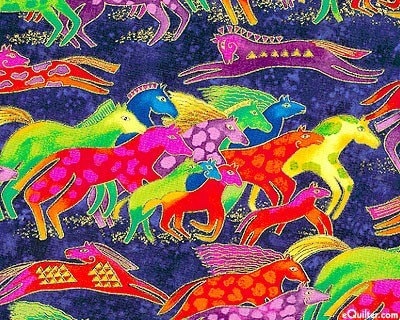 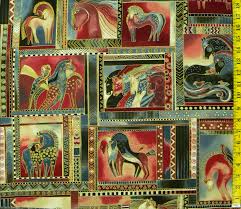 See you all Friday,