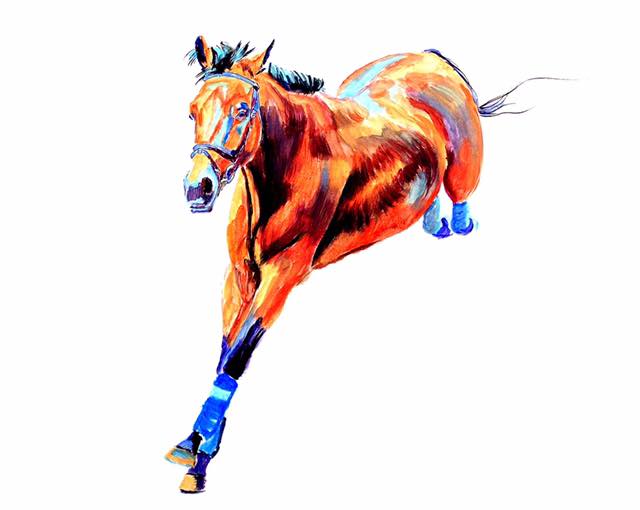 Steve Messenger studied at the Maryland Institute Collage of Art  before working as a groom for several barns. He then went on to study at the University of the Arts and has been creating equine art as a professional since 2001. Since then, he has worked at the Philadelphia Museum of Art and was the Director of the Howard Gallery of Fine Art and Framing.

2007 Howard Gallery “ No Horsing Around”

Below is Steve Messenger’s interview with #equinearthour on Twitter this past Sunday. Be sure to come on this Sunday for Lisa Diersen, Director of the EQUUS Film Festival’s interview!

TFS: Hello Steve Messenger! Thank you for joining us. Can you tell us a bit about yourself?

SM: I’m a Philly artist who groomed for years and focus on horses as a contemporary subject.
I went to University of the Arts and I rode as a kid and always like the enviornment around the barn.

TFS: Have you always painted horses?
SM: No, when I was in highschool it was science fiction and fantasy (kid stuff) then at art school I was doing wild stuff. I had to drop out and groom for 10 very odd years before the horse took center stage.

TFS: How long have you been around horses? Did you always want a career with them?

SM: I was always drawing as a kid and really didn’t have a clue what I wanted to do after high school. I excelled at drawing so it seemed logical to go to the Maryland Institute College of art.
TFS: Have you ever created art for a poster for a horse show?
SM: I’ve been doing mostly large commissions and daily ink and acrylic work for sale and promotion. I’d like to enter some poster competitions and need to find the time. I was thinking for the Winter Equestrian Festival this year. 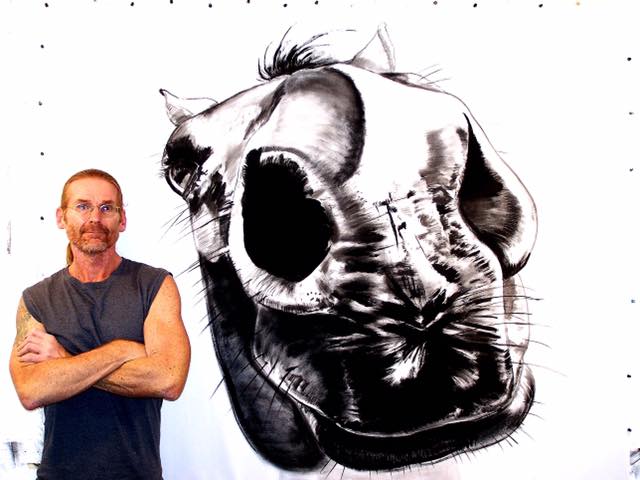 TFS: Any upcoming art shows/exhibits? Where else can people see your art?

SM: My art is currently on view at the ART UNLEASHED show at University of the Arts. I’m very much an online business. Also on Facebook, “Equine Art By Steve Messenger”.

TFS: Can you tell us more about your style?
SM: My oil technique is based on Edward Hopper’s style and my transparent acrylic work is an invention based on my own ink wash experiments. I’ve gotten a bit of push back on my switch to transparent acrylic from oil. Some people are not amused at my direction. People either love or hate my new work.

TFS: How did you get so many likes on your FB page? Has it helped your and your art?
SM: Relentless posting of new work and posting in forums. Social media is the face of marketing for independent artists and you must invest the time in it.
You must consider running the occasional ad set as well because you have an audience ready unlike a website.

TFS: Horses seem to be your main focus. Do you draw/paint anything else besides horses and dogs?

SM: I don’t have time for anything else right now because its my income. I’m 100% dedicated to building an international reputation like Tony O’ Connor.
Being an artist today is brutal due to the lack of art education in the public and Chinese prints.

Do you sell prints, or just do originals/commissions?

SM: Only originals but I’m looking into image marketing. I’m concerned that reproduction lowers value. I’m known for the large scale line drawings and those don’t translate into small prints

TFS: Do you ride today?

SM: I fracture my back and pelvis in 5 places from a tractor accident so no. I do run marathons. I’m not flexible. I can’t sit a horse but can run 26 miles lol. 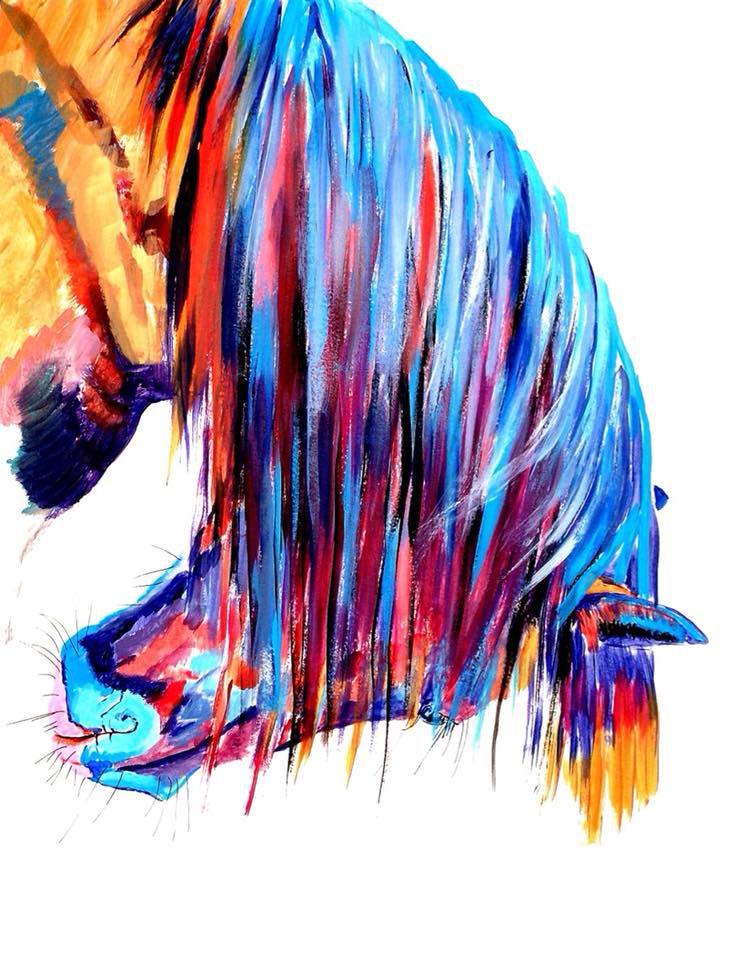 TFS: Any wise words for other artists?
SM: Lean in and fight.

TFS: What are the ways you find most useful for promoting your art?
SM: Cross linking social media platforms for the maximum eyes to see.
TFS: Is there a medium that you have not worked in but would like to?

SM: No, I like what I work with now in terms of painting. I get in trouble when I experiment. 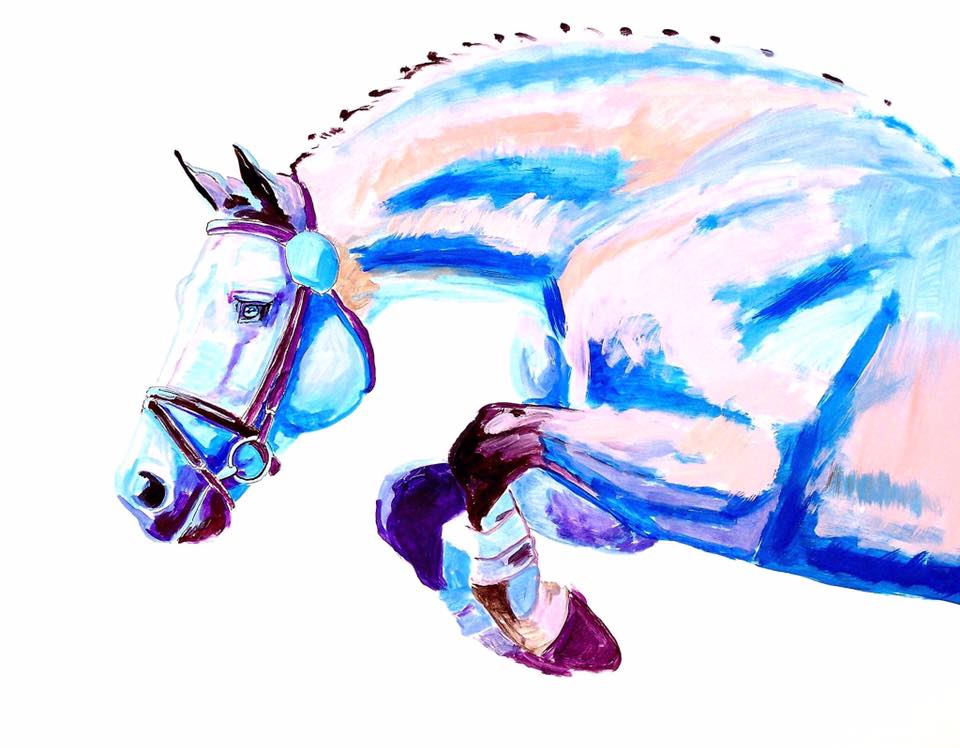 TFS: Are there any artists your are inspired by or have collaborated with on an art project?
SM: I’m inspired by Tony O’Connor and I haven’t collaborated really.
TFS:  Has your years in show jumping influenced your art in any way?
SM: Yes: I prefer Warmbloods as models.

TFS: Where do you see your paintings in five years?

SM: I’m trying to evolve a style in transparent acrylic over high contrast black and hope to be doing them 8 x 10 feet on commissions.

TFS: Where do you see equine art in general going in five, ten years?

SM: I don’t know where figurative art is going at all due to a lack of patron education and arts funding, but equine art is doing better then most genres and I think it’ll continue.

Thank you, Steve, for taking part in #equinearthour and letting me share your art with my readers!