When you think of Salvador Dali, you would probably think of images of other worldly art, or even his comically curled mustache-probably not of unicorns or, a car giving birth to a blind horse with a telephone. And no, I did not make the last one up 😉 Since in three days time it will be January 23rd, 28 years since his death, I thought today’s article would commemorate this artistic legend.

Salvador Dali was born in  Figueres, Spain. From an early age he and his family believed he was the reincarnation of his dead older brother. Of his brother, Dalí said, “We resembled each other like two drops of water, but we had different reflections. He was probably a first version of myself but conceived too much in the absolute.” 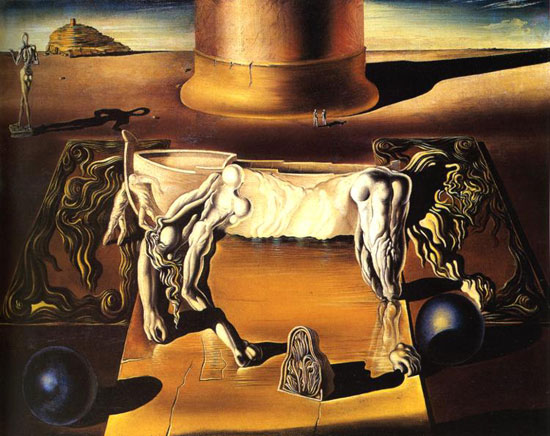 Dali’s love of art let him to attending art school while a teenager. During the summer of 1916 he traveled to France with the family of a local artist,  Ramon Pichot and the next year he had his first exhibit of his art in his home in Spain. Later in 1922, he moved to the Real Academia de Bellas Artes de San Fernando (an art school in Madrid, Spain). From then on, he had many exhibits around the world and is one of the most famous artists of his time.

You can see his work at Dalí Theater Museum and the Teatro Museo Dalí, both in Figueres, Spain, Museum-Gallery Xpo: Salvador Dalí in Belgium and in many other museum across Europe.