I really find Florencio’s Gauchos extremely comical and I hope you do too!

Florencio Molina Campos was born on August 21, 1891, in the house of his mother´s parents in Buenos Aires. His parents, Florencio Molina Salas and Josefina del Corazón de Jesus Campos y Campos. As a child, he went to the most prestigious schools. His summer vacations were spent at his father’s ranch  named Los Angeles, located in an area then called Tuyú, now Madariaga. His love for the men who worked the fields, and the pampa’s (meaning plains) landscape were the source of the images that permeate his paintings. It was in Los Angeles that his vocation was born.

Around 1905 his family moves to La Matilde, an estancia in the province of Entre Ríos, facing the Uruguay river. They also have a house in Concordia, but the boys wanted to stay in the country, working with the workers, visiting the outposts, learning the ancestral art of men working the fields.  but it all comes to an abrupt halt when the father dies unexpectedly on March 26, 1907. Florencio will start to become nostalgic for his lost world.  Florencio started to paint the country life which made him famous.

The Uruguayan writer and politician, Eduardo Acevedo Diaz wrote “Florencio Molina Campos is one of the guardians of the old Argentina, which I wrote about in my novels ´Ramón Hazaña´ and ´Cancha Larga´.” He went on to describe Molina Campos´ work stating: “Much of his work with the human figures in his paintings has been eulogized, but little has been said of his remarkable depiction of the landscapes of the old pampas. Because the pampa of Molina Campos has not been touched by agriculture. Under his brush, the pampa he represents is lying in repose, beneath an arching sky as vast as the sea, giving us an impression of the silence of life, the thoughtful way that things should be.”

In 1920 he married Hortensia Palacios Avellaneda, and opens up shop in downtown Buenos Aires. The following year his daughter Hortensia María is born, and in December of that year, he closes his business. His marriage ends in 1924.

In 1926 he has his first exhibition at the Sociedad Rural. It is a great success. The President of Argentina visits the exhibition and appoints Molina Campos professor of drawing of the Colegio Nacional Nicolás Avellaneda, where he taught for eighteen years, convinced that he was “a better teacher than artist”.

The renowned art critic and academician of Fine Arts, Córdova Iturburu states: “When Molina Campos first exhibited in the Sociedad Rural Argentina, his caricatures of gauchos, executed in pastel prints, produced great interest on the part of the people familiar with rural exhibitions, which was highly unusual. The unexpected was that the artist viewed the gaucho as the gaucho saw himself. He wasn´t the poet´s gaucho, or the historian´s gaucho or the gaucho of the world of fantasy. He identified with them, and saw them through their own eyes, and looked at them with fun and affection.”

According to Pio Collivadino, an influential Argentine painter, his gauchos are “harmoniously deformed”.

In 1931, the  company Alpargatas commissioned the Molina Campos´ first calendar .These calendars continued until 1936, and were reprinted between 1940 through 1944.They quickly become a collectors item .

On the 21st. of June, 1932 he married Maria Elvira Ponce Aguirre. That year the organizing committee for the Concordia Centenary Celebration asks him to participate with his paintings. Concordia forms part of his memories, as that was where he was happy in his youth, and where his father died. He not only participates in the program, but donates a painting to the local hospital.

In 1939 his drawings are featured as magazine spread and billboards in advertising campaigns in the US. In 1943 a Minneapolis company features his work in their calendar. As a result, Molina Campos´ famous gauchos become well known, and decorate Western bars and homes. His painting are now in the “Horse of the Americas” museum at the University of Texas, in Austin. He is also the only foreign artist exhibited in the Charles Russell Gallery in Montana.

Cesáreo Bernaldo de Quirós, one of the most notable Argentine painters of the twentieth century said: “Molina Campos is the creator of the character derived from the legendary gaucho who was glorified as a freedom soldier,  bizarre and courageous during the civil war. Alone, without teachers or academicians, Molina Campos translates that truth, counting on all he had learned about the open country, the rodeos, the gatherings in the fiestas and the local bars and that enormous understanding of the gauchos´ dress, their names and their mounts. That is how he developed his gaucho — ´The gaucho of Molina Campos´”

In 1942 Walt Disney hires Molina Campos as a consultant to help him with the production of several films set in Argentina. However, the relationship lasted a short time, as Molina Campos objected to the lack of documentary feel to the animation produced in the US. They enjoyed a friendly relationship the rest of their lives, but the opportunity of having his beloved characters re-created by Disney was lost. In any event, his work helped mold films such as “Goofy Goes Gaucho” and “The Flying Gaucho”. He also collaborated in “Saludos Amigos”, a movie narrating Disney’s travels through South America. That year he illustrates “Faust”, by Estanislao del Campo and “Vida Gaucha” a Spanish texbook for US students. He also illustrated an edition of “Tierra Púrpura” by G.H.Hudson, and drew rough drafts for “Martin Fierro” and “Don Segundo Sombra”, He won the CLARIN gold medal, of the Argentine Artists Salon, and in 1956 he acted in the short film called “Pampa Mansa” and attended the Berlin film festival, when it was presented there.

His work was shown in over thirty successful exhibitions in Argentina and the U.S., France and Germany, aided by his fervent admirer Edward Laroque. His paintings can be found in many museums and private collections around the world. He also painted panels for the South American House, in London, a city in which he was admired by many.

Art critic Rafael Squirru wrote, in 1972 “Unlike most, the work of Molina Campos raises the prickly problems of the creator in our medium, from the social significance to his peculiar style. His caricature style, which represents the bulk of his work, obscures in part the transcendental aesthetics which governed his work from the very beginning. Although there are few surviving original drawings of Molina Campos, it is evident that which Ingres called ´the integrity of art´ is where his sharp accurate drawings are placed at the service of his own vivid imagery”. 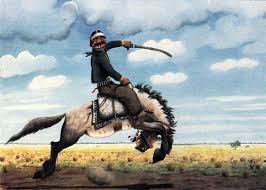 Back from the Berlin Festival, Molina Campos had his last show in Argentina. He showed eighty paintings. It was a great success and most of his work was sold. After the event, Molina Campos died in 1959 from cardiac problems.

He was a member of numerous cultural institutions and an obsessed defender of Homeland Tradition.

His friend, Edward Laroque Tinker said, “The world lost a genius that had dedicated his Life to bring happiness to a tense world. What better epitaph could he have had than: ´He made many millions smile”. 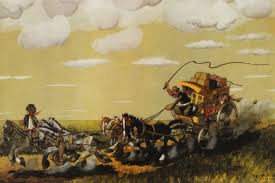 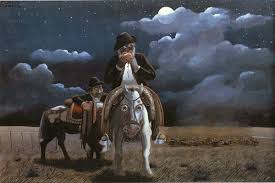 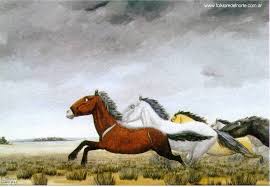 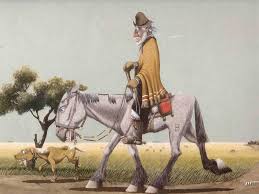 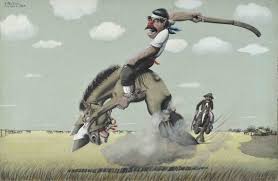 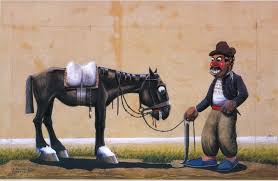 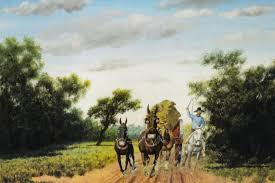 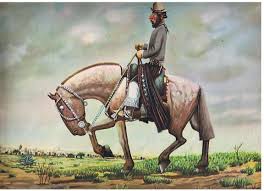 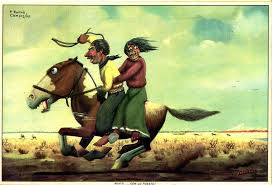 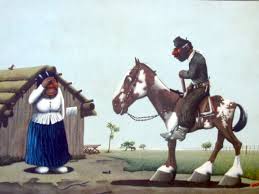 I hope that Florencio’s caricatures of gauchos made you smile today!:)


Huh? What? Well, I will believe that when I see flying Shetlands !