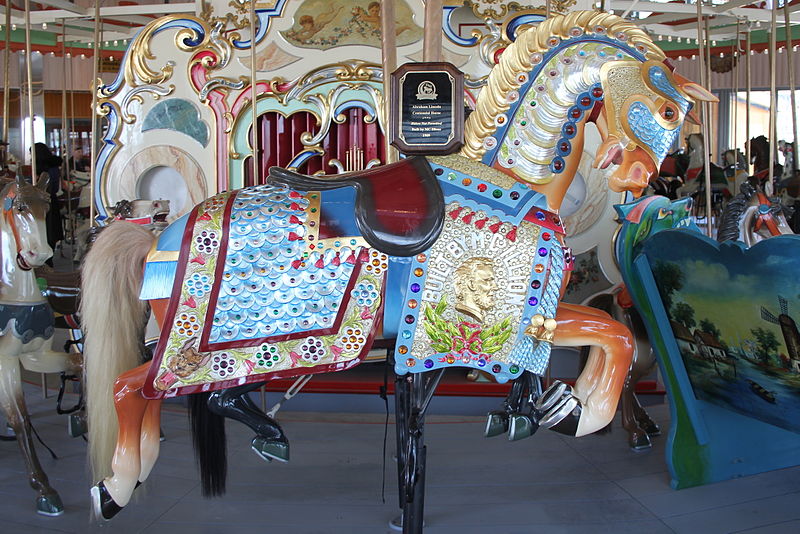 A 1909 horse by Marcus Illions in the Coney Island style. Photo by Peter Greenberg

Since last week I featured and interviewed Janice Fischer – a photographer who turns horses into carousels– I thought I would do a brief history on carousel horses! Note: I could not find all the photo credits/artists or where these carousels are located. If you know who made them/took the photos/ locations of these carousels, please comment or contact me.

Photo by Unknown – The State Library of NSW, Public Domain

Carousels are a beloved tradition for many; people of all ages love to go to fairs, carnivals or amusement parks to ride the horses and other animals. But, like many things, carousels had a much more practical use.

The word “carousel” was first used to describe a game played by Arabian and Turkish horsemen in the 12th century. Their game, which involved tossing a ball of clay between riders on horseback. The game was played with such seriousness that many didn’t think of it as a game at all. Italian crusaders who first observed the game called it a “little war” or “carosello.” The French adopted this game into their own variety of equestrian competition and from this comes the French word “carousel” that we use today. In order to practice for these competitions, a  device was created which featured legless wooden horses suspended from arms on a central rotating pole. The pole was rotated either by human, horse, or mule while the horsemen would mount the wooded horses and practice the games, such as spearing a hanging ring with their jousting lances. A few carousels still include a ring dispenser, such as the Santa Cruz Beach Boardwalk. The Golden Age of Carousels

Before long carousels were being built specifically for the purpose of entertainment. By the late 1700s, the carousel was making appearances at fairs and festivals throughout Europe; yet the size of these carousels was greatly limited by the power source, which continued to be either man or horse. This all changed on New Year’s Day, 1861, when Thomas Bradshaw opened the first steam-powered “roundabout” in Bolton, England. The newly incorporated power system would launch the golden era of carousels that lasted from the late 1800s until the Great Depression.

Even though the carousel we know today originated in Europe, American craftsmen were the ones responsible for bringing the carousels into their golden age.  The American carousels where huge and elaborate compared to their European beginnings. One of the most famous carousel makers was Gustav Dentzel, the son of a German wagon and carousel builder, Michael Dentzel. “Dentzel carousels”  as they are mostly known as and are highly sought collectors items. In the late 1800’s, the carousels adapted the up and down motion that most of us associate them with. As well as making horses, American carousel makers added other animals to their works.

The End of an Era

But, during the Great Depression, carousel builders understandably ceased making carousels. Besides having a depressed economy, the rise of the roller coaster in the early 20th century began to overshadow the carousel’s place in the amusement park industry. They started being called a “Children’s Ride”, since they did not have the excitement of the newer and faster rides. However, the carousels have continued to survive in the ever-changing amusement industry. Since the 1970’s, people have started to help restore the hand carved carousels of old or creating new hand carved horses for yet another generation to enjoy. Carousel horses featured on stamps from the USA House on the Rock

The House on the Rock originally opened in 1959 in Wisconsin.  It is a complex of architecturally unique rooms, streets, gardens and shops designed by Alex Jordan, Jr. It also includes A huge Carousel, with many types of animals. Photos from here. Zenyatta as a carousel at the LA Zoo Carousel in LA, USA Circa 1902 from the E. Joy Morris carousel works in Philadelphia I hoped you learned something new about your favorite amusement rides!