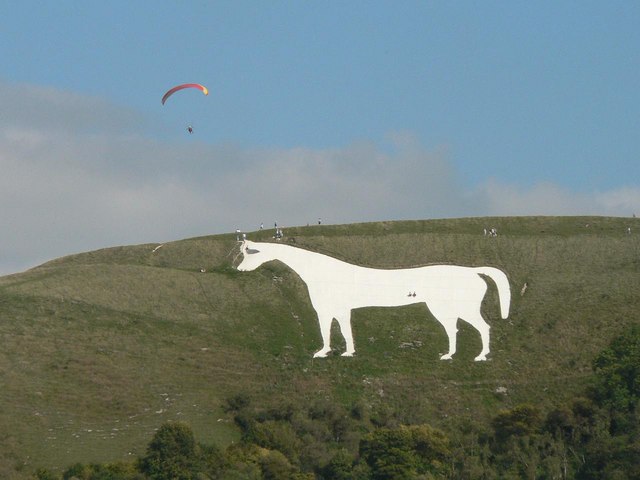 The Westbury Or Bratton White Horse

The Westbury white horse is one of the oldest of the Wiltshire horses and is also one of the best placed being high on a very steep slope. It is on Westbury Hill, on the edge of the Bratton Downs, below the Iron Age hill fort called Bratton Camp, north-east of Westbury and near to the villages of Bratton and Edington.

There has been a white horse on the site for at least three hundred years or so. The earliest mention of it is in “Further Observations on the White Horse and other Antiquities in Berkshire” by the Reverend Wise, published in 1742. He says that he was told of the horse by local people that lived there  and that the horse was first cut in the late 1600’s.  According to his book, the  horse had a very different design then it does today.

Mr. George Gee who was a steward to Lord Abingdon in 1778, had the chalk horse re-cut into a shape that looks very much like the current one.

A century later the horse had become somewhat misshaped, and in 1873 it was restored to it’s original design and edging stones were added to help hold the chalk in place. The shape of the present horse dates from this restoration. In the early 1900’s concrete was added to hold the edging stones in place. In the late 1950’s, it was decided that it would considerably reduce the maintenance costs if the horse were covered in concrete. This work was carried out, and the concreting was repeated in 1995. By far one of the more “usually shaped” chalk horses, this equine is also one of the smallest. The white horse is on a  shallow slope on Granham Hill, above the village of Preshute, just southwest of Marlborough.

in 1804,  students of a boys’ school run by a Mr Greasley cut the Marlborough White Horse. The horse was designed by a student named William Canning who also marked it out on the hill. It was scoured every year, and this scouring became a much-loved tradition at the school.

Unfortunately, the horse was neglected after  Mr Greasley’s death around 1830 when the school was closed. By 1860, it was in reasonable condition again. A photograph taken that year of a cricket match shows the horse in the background. In 1873, having been neglected again, it was scoured under the direction of a Captain Reed, a former student of Mr Greasley’s school, who had taken part in the creation of the horse.

This horse seems to have changed a lot in appearance over the years. In early twentieth century photographs it looks quite solid and naturalistic, but it is now much thinner and more stylized.

The horse is not easily seen from afar due to the many trees which obstruct distant views of it, but it can be seen from parts of Marlborough.

Footnote:
A new roundabout is to be built in Salisbury Road, Marlborough to provide access to the new White Horse Business Park. There is a plan to create two chalk white horses, one on each side of the roundabout. I cannot seen to find if this has happened or not.

The Osmington White Horse is a hill figure sculpted in 1808 into the limestone Osmington hill just north of Weymouth called the South Dorset Downs. The figure is of King George III, who regularly visited Weymouth, riding on his horse, and can be seen for miles around. It is 280 feet long and 323 feet  high in size and is best viewed from the A353 road.

In 1989 the figure was restored for a broadcast of the TV show Challenge Anneka, although the work was subsequently criticized by historians for doing more harm than good. Anneka Rice, the presenter of the show, stated that planning permission and advice had been sought before the work.

In August 2011 pranksters added a ‘horn’ made from plastic sheeting to make the horse resemble a unicorn.

In 2012, it was announced that for the Olympics 2012, the horse would be cleaned up and slightly re-cut to make it look like it originally did upon its cutting in 1808. The restoration project occurred on  March 11, 2012, where Princess Anne attended the service which also revealed a brand new plaque, made of local stone. The restoration was cut into shape by a group of volunteers, who had spent two years carrying out repairs.

Planning permission was granted to make this horse was announced in March 2002 stating that the cutting of the horse would be allowed to go ahead. Work began in autumn 2002 and the horse was completed in 2003. The horse, made by the artist Charles Newington, is an outline figure like the Uffington Horse, rather than the solid shape that most white horses have. It is constructed of cut chalk slabs, pinned together and pinned to the ground.

Cut in 1857 on the instructions of a Thomas Taylor, this large horse is on Roulston Scar in the Hambleton Hills, north of Kilburn village. It can be clearly seen from the A1 near Kilburn. It is known by various local names, and this has caused some confusion, leading to claims that there is more than one white horse in the area.  The horse was created by removing the turf to reveal limestone, which was then whitewashed with lime. It is maintained today by the Kilburn White Horse Association.

Cut around 1838, This horse was placed  on a good steep slope on Hindover or High and Over Hill overlooking the Cuckmere valley, perhaps to mark the coronation of Queen Victoria. It was lost around the time the new Litlington horse was cut about a bit to the south east. It seems that this new horse was a replacement for it.

The new Litlington white horse was cut around 1924 or 1925. In 1983 its design was altered slightly by raising one foreleg to give better definition to the legs.

Unfortunately, not every chalk horse has survived through the years.

The Ham Hill Horse was cut by Mr Wright in the 1860s, who had purchased a property in the valley, Ham Spray House, from where a clear view of the soon to be Ham Hill Horse could be seen. One of the most unusual things about this horse is that there was no chalk infilling used. Instead, they removed the turf to show the limestone beneath.

This is one of the two Wiltshire white horses which are totally lost. Just inside the Wiltshire border, it was on a steep slope on Ham Hill near Inkpen Beacon five miles south of Hungerford, and will have been easily visible from the valley below.

In the course of time the property changed hands, and the new owner had no interest in maintaining the horse. It will not have taken long for the soil to have encroached on the bare chalk and for the horse to have become completely invisible. As there was no chalk infilling to lay hidden under the soil, nothing at all now remains of the Ham Hill White Horse.

The only evidence that this horse (or sometimes referred to as a donkey) has existed at one point in time is from Kathleen Wiltshire. In her book “Wiltshire Folklore”, published in 1975, she wrote: “… and a small ‘donkey’ is still partly visible on Tan Hill, though the legs have become quite overgrown. The shepherds call this ‘Donkey Hill’ and one told me he had ‘eaten bread and cheese on its back scores o’ times’. This pony or donkey is 75 feet from nose to tail, which stretches down much like that of the Uffington horse, and its head is very large.”

Kathleen Wiltshire went on to say, “… in the ‘valley’ between Tan Hill and Rybury Camp stands a miniature stone circle of nine upright sarsen (sandstone blocks) stones about four feet in height, in the center of which lies a prostrate stone, about the length of a man. A pathway leads up to the ‘donkey’ from the circle.”

It is  worth noting that there has been some suggestions that the horse might have been cut and maintained by visitors to Tan Hill Fair, a sheep trading/entertainment fair, held on Tan Hill on August 6th and 7th from at least the fifteenth century until 1932. The location of the horse turns out to be very near the site of the fair. And if the horse began to fall into disrepair when the fair stopped, then it is not surprising that it was becoming overgrown when Mrs Wiltshire described it and has now disappeared.

Aerial photo of the Rockley horse taken in 1948

The Rockley white horse is a mystery that may never be solved. It was discovered in 1948 when land belonging to Wick Down Farm on Rockley Down was plowed. The plow brought to the surface a mass of chalk in a pattern not identifiable on the ground. Local shepherds said that they had long been aware of a discoloration of the grass in that area. Aerial photographs were taken, and the chalk was revealed to be the infilling of a previously unknown white horse. In the course of turning over the soil, the plow had moved the chalk a furrow’s width eastwards, but the figure of the horse was still  recognizable.

The horse was beside a footpath by a beech plantation about a quarter of a mile south west of the minor road from Marlborough to Wootton Bassett, some four miles north west of Marlborough. It was a well-proportioned horse, depicted trotting  with a long square-cut tail, and facing left as do most of the Wiltshire horses.

The position chosen for the Rockley horse is a rather odd one. Rockley Down has a long steep ridge, which would seem to be an ideal site for a white horse, but the actual site is just over the top of the ridge, on much less steeply sloping ground. It was perhaps intended to be seen from the turnpike from Marlborough to Wroughton, a main highway which crossed the downs to the east.

Who was responsible for the Rockley white horse, why it was cut, and when, remain mysteries. But sadly the horse is long since lost, with the land plowed and the chalk dispersed, and its origin will probably never be known.

Postcard with the caption Hindhead; The White Horse.
Postmarked 21 August 1923

There was once a white horse near Hindhead in Surrey, on Combe Head. There is a postcard of a white horse with the caption “Hindhead; The White Horse”, posted on 21 August 1923.A different postcard bearing the same photo gives the location as Gibbet Hill, Hindhead.

There was once an article that quoted from a letter that a Mrs Marjorie Gray wrote,saying that the horse was on the common at the top of Bunch Lane at Combe Head and had been designed to be viewed in perspective from Gibbet Hill. She said that it was designed by her brother-in-law Mr E A Walton, an Edinburgh artist, and was constructed from stones collected on the hillside by her husband, his brother and others. Apparently the stones were painted white. Mrs Gray and her husband returned to live in the Hindhead area in 1927, and found the horse to be in poor condition. They restored it, and kept it in good condition until 1939, but by 1975 the site was covered by pine trees.

Thanks for reading and I hope you learned something new about these magnificent chalk horses!