Many people often wonder about time. What is the invisible thing the continuously moves forward that we call time?  It is real?

Time is what we want most, but what we use worst.

While we may never have answers to these questions, one of the closest things to actually “seeing” time is looking at Christian Hook’s otherworldly paintings of horses. If there ever was a perfect mix of realism, abstract and the essence of time, Christian’s paintings are made of that mixture. With his own way of layering paint onto his canvas, it feels like you are looking a horse, a person or a landscape over a period of time. Many artists try to capture the moment, the split-second, but Christian manages to capture years all on one canvas. 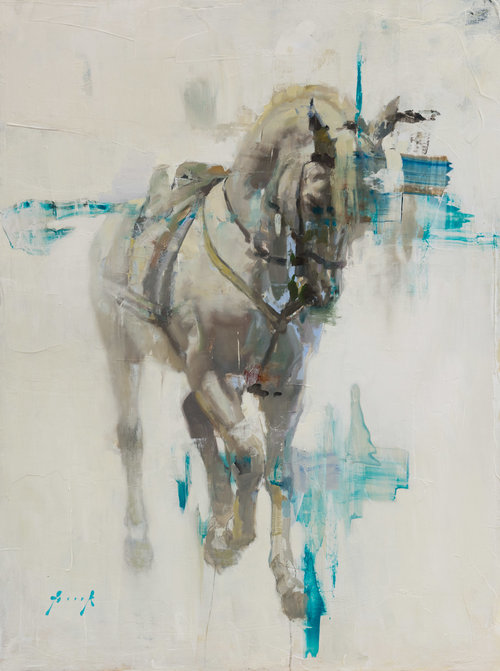 Christian Hook
Location: Gibraltar
Website, Facebook, Twitter
Christian Hook grew up in Gibraltar and was interested is the arts from a young age. When the time came, Christian moved to study illustration at Middlesex University, London to learn the skills of an illustrator. After school, Christian had a hugely successful career as an illustrator for many international companies, such as Disney, Reader’s Digest, English Heritage and other publishers. Christian also taught  his skills in illustration to students at the Royal College of Art.

Christian began developing an interest for fine art. He now works as a full time artist, challenging himself to create paintings “depicting motion, time and the moments that occur between events.”
With this unique idea, Christian has created paintings of celebrities, historical landmarks and of course, our beloved equines.
Christian says that he studied  Cezanne’s famous works featuring multiple view points for one subject, as well as other artists.

“We are always on the move, if not physically, mentally.”
– Christian Hook

Christian’s paintings hang in some of the worlds’s most renowned places, including the collection of His Royal Highness Prince Edward. He won many awards at Gibraltar International Art Exhibition for a number of years, but one of most successful ventures must have been when he won Sky Arts Portrait Artist Of The Year in 2014. In 2015, he was featured in a three part documentary series on the Sky Arts Channel, showcasing him painting several famous celebrities: Mick Hucknall, Fabrice Muamba and Sue Johnston. 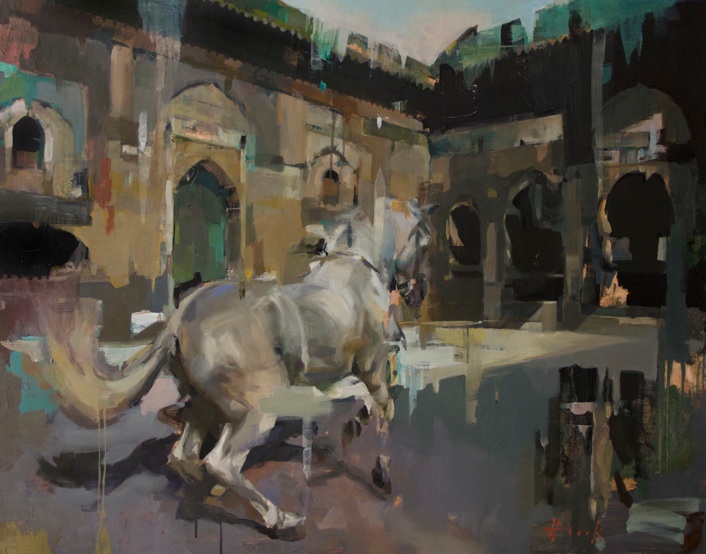 You can clearly see the history and tradition laced in Christian’s work, along with his own special style that makes his paintings one-of-a-kind. He lives and works in Gibraltar between the Atlantic and Mediterranean Oceans where “there is within each painting a sense of the interweaving of Hispanic folklore iconography and the remnants of British colonialism.”

Below is Christian Hook’s Q&A with #equinearthour this past Sunday! Be sure to join us every Sunday, 4-5pm EST for a Q&A with equine artists from around the world.
TFS: Hello and welcome to #equinearthour, Christian! Thanks for joining us for a Q&A today. Would you tell us a bit about yourself?
CH: I’m an artist from Gibraltar, currently working in London. I focus mainly on 2 subjects, bathers and horses.

TFS: Were you always interested in the arts? Did you always plan on becoming a professional artist?

CH: Yes. I started off as an illustrator and worked for most major publishers in the UK and in the USA, including Disney, Marshall editions, Readers Digest and Penguin Books. I worked on abstraction for 6 years then met an artist called Francisco Farreras and was extremely influenced by his work. I learnt a lot while working in abstraction since I did not have a subject matter. Space, form and color became the theme. I then won 6 international prizes with this work. When I went back to illustration I found painting hard. So I tried to mix both things and found the layering process a great way to do this. In some layers, I would construct and in others I would deconstruct.

TFS: How did you get involved in painting horses? Do you ride?
CH: I found many classical artists of the past took this majestic subject as the main theme in their work. George Stubbs was one of my favorites. So I’m trying to do my it to revive it 🙂 I’ve always been an equine enthusiast and rode for a time. However, I had other reasons for painting them.

TFS: Did you study art a college or art school?
CH: I studied technical and scientific illustration at Middlesex University in London. I then furthered my art education at the Royal College Of Art.
TFS: Would you tell us more about winning Sky Arts Portrait Artist Of The Year? How were you selected as their winner?
CH: Sky Arts Portrait Artist Of The Year was a great televised competition. It was intense and exciting. Three judges who were each experts in different fields were looking for someone with a different approach.

TFS: I watched your Sky Arts documentaries when they came out, but cannot find them now. Where can people view your series?
CH: Unfortunately the series is only available for viewing by subscribing to Sky Arts. For now 🙂
TFS: Are you planning on having an exhibit of your equine artworks in the near future?
CH: My next equine exhibition will be in London at Clarendon Fine Art Gallery in October 18th. 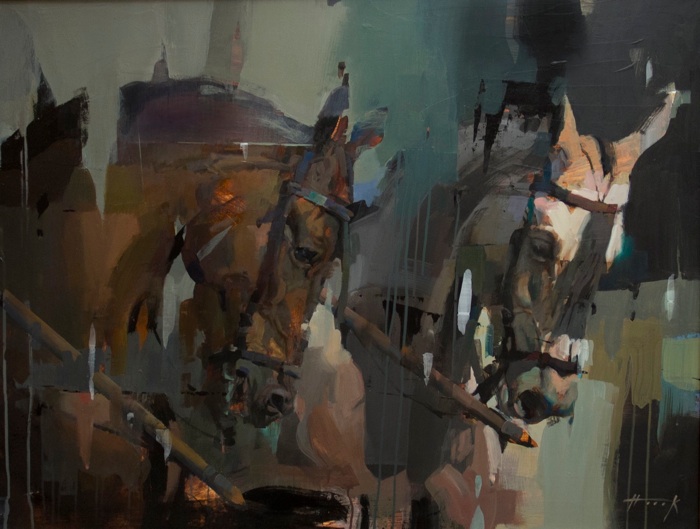 TFS: Would you tell us more about your book?
CH: My book will be released in mid October. A lot of it is on my equine work 🙂 It’s based on my investigation and findings on the creative process. It will be available from the Clarendon Gallery and on other online stores. 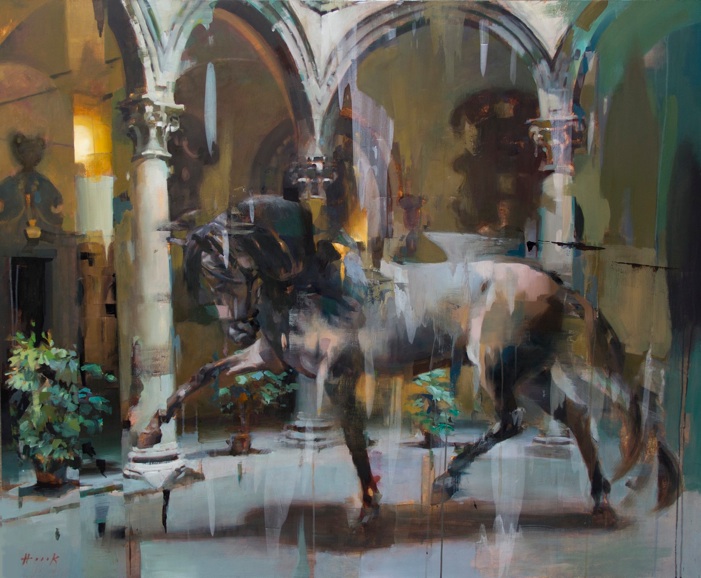 TFS: What is your favorite part of illustration?
CH: My favorite thing about illustration is what I learnt about form and color. However, I feel I’ve moved on.
TFS: Do you take commissions for equine paintings?
CH:  I’m not taking on commissions at the moment as I have some interesting tv projects lined up for this year.

TFS: I read that you teach at a Girls School in Gibraltar. How long have you been working there?
CH: I left teaching 3 years ago to pursue my artistic career. I have learnt a great deal from my students. Children are not afraid of experimenting. I am always learning.
TFS: How would you describe your style?
CH: I attempt to paint time. All of my works are a fixed amount of time in the life of something. I frequently work from video pausing frames as the work progresses. Many things can inspire me. A feeling, a sound , a color or a series of movements. 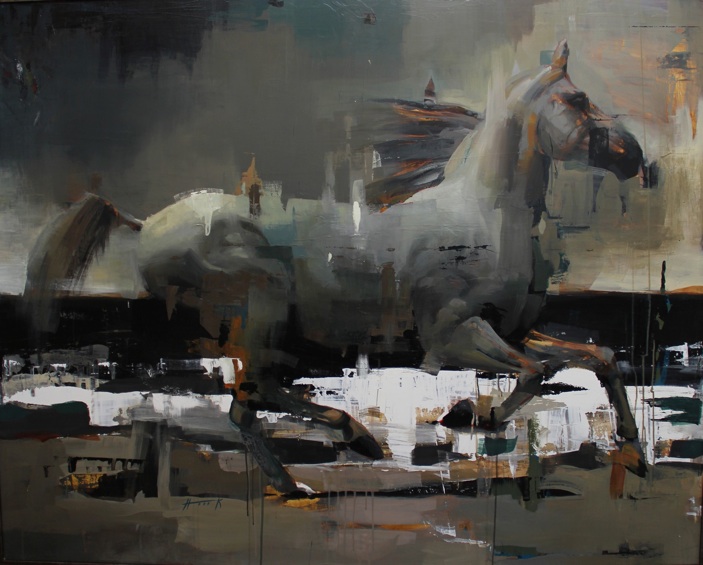 TFS: Any wise words for other aspiring artists?
CH: I would advise any artist to try and find a different way of seeing a subject or a medium. To explore one thing in depth rather than skim over many subjects. Then it’s always interesting to them.
Thanks for the interview, Christian! Looking forward to seeing more about your exhibits and books!