Yesterday was arguably the world’s best known equine painter, George Stubbs 295th Birthday. Still just as popular as when he was first alive, lets look at eight interesting facts about this revered artist.

George Stubbs and spent 18 months dissecting horses, assisted by his common-law wife, Mary Spencer. Learning the muscling, tissue and structure beyond what was visible of a live horse was vital to George Stubbs and his career. He is one of the first known artists to do this, and his discoveries changed the art world, still affecting how modern artists learn today.

2. The Anatomy Of The Horse

After making his discoveries within the slaughter house, Stubbs moved to London in about 1759, and a few years later in 1766 published The anatomy of the Horse. The original drawings are now in the collection of the Royal Academy. You can still buy copies to this day.

3. His earliest surviving works were for a book on midwifery

While in York, England Stubbs worked as a portrait painter and studied human anatomy extensively under surgeon Charles Atkinson at York County Hospital. One of his earliest surviving works is a set of illustrations for a textbook on by John Burton, Essay towards a Complete New System of Midwifery, published in 1751.

Stubbs’ painting of a kangaroo was the first glimpse of this animal for many 18th-century Brits.This another another painting of a dingo were the first paintings depicting Australian animals in the western world. Both paintings were bought by the National Maritime Museum in Greenwich, London after a public appeal to raise the £1.5 million required in 2013 to keep the paintings in England.

Like his father, Stubbs’s son, George Townly Stubbs was an engraver and printmaker. 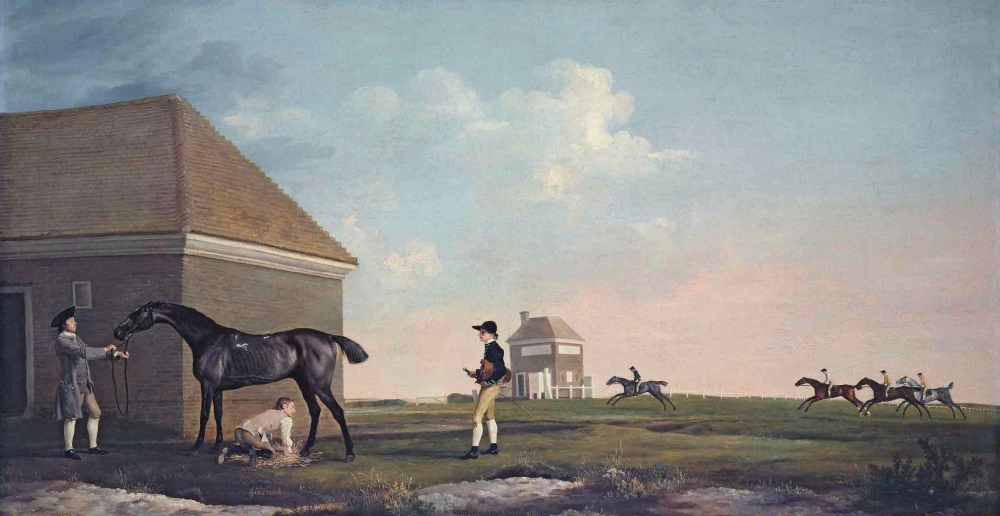 The record price for a Stubbs painting was set by the sale at auction of “Gimcrack on Newmarket Heath, with a Trainer, a Stable-Lad, and a Jockey” (1765) at Christie’s Auction House  in London, July 2011 for  a whopping £22.4 million. It was sold by the British Woolavington Collection of sporting art and the buyer was anonymous.

7. Political meanings to the paintings of a lion attacking a horse?

“Catholicism and Jacobite associations dropped away after Stubbs’s brief visit to Rome in 1754, but they seem to have left him with an abiding distaste for the Hanoverian monarchy. He studiously avoided any royal commissions for the following three decades (before succumbing to the duplicitous charms of the future Prince Regent, which is another story), and, in the meantime, anti-Hanoverian concerns continued to ripple beneath his art.

I suspect, for example, that his obsessive reworking of the lion savaging a horse may have had its origin in a private idée fixe . A well-known Jacobite medal showed the white or pale horse, symbol of Hanover, trampling the lion and unicorn of England while Britannia looks on and weeps. Did Stubbs encode a reversal of this motif, in which the lion of England takes a signally savage revenge?”

To continue reading this facilitating article that dives into the life of George Stubbs and brings his story to life, go here.

8. George Stubbs: ‘All Done From Nature’

Even today, 295 years after his birth, George Stubbs is making headlines. George Stubbs: ‘all done from Nature’ presents the first significant overview of Stubbs’s work in Britain for more than 30 years and brings together 100 paintings, drawings and publications from the National Gallery’s Whistlejacket to pieces that have never been seen in public. A major theme of the exhibition is anatomy. The show includes forensic drawings by Stubbs of humans, tigers and hens, as well as horses, at different stages of ‘undressing’. This greatest coming together of art and science in British art will be set alongside the actual skeleton of the legendary racehorse Eclipse which Stubbs depicted on several occasions. A version of the show will tour to the Mauritshuis in The Hague where it will be the first-ever exhibition on the artist in the Netherlands.’ You can buy tickets HERE.

Are you missing out on Art Of The Horse content?