Hailed as the most famous equine artist in art history, Fred Stone has passed on at the age of 87 on February 4th, 2018  from health complications relating to cancer. His mythic paintings transform from just a painting to a story of a lifetime that is conveyed through every thoughtful moment he spent working on his paintings. “All of my pictures have a story,” he said, “and I could get into a story on every one of them.” 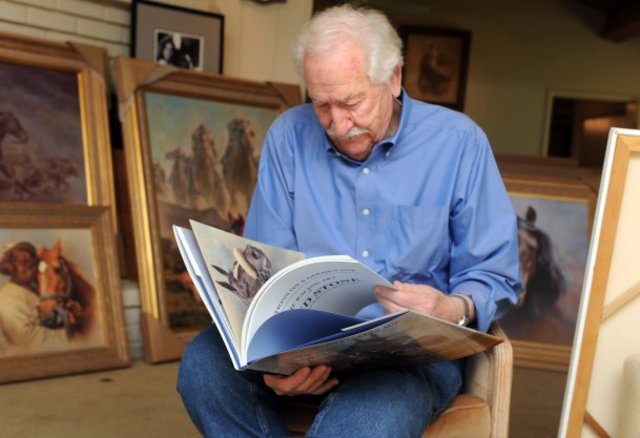 Depicting racehorses just as legendary as himself, he started his epic career as a full time equine artists in the 1970s. Growing up in Los Angeles, CA, his enthusiasm led him to study at The Art Center School and Chouinard Art Institute in Los Angeles. Before working in the equine art world, Fred Stone painted the backgrounds for films in the film industry and working a commercial artist. His transition into the world of horses launched him into a world of success, with his prized paintings hanging on the walls of the White House, HM  Queen Elizabeth II and hundreds of prestigious racehorse owners and fans around the world. In fact,  more people own a Fred Stone print than that of any other horse artist in history, making him the most sought after equine artist in the world, according to his website.

Fred Stone was active in helping retired racehorses and other animal rescues. He donated the proceeds of many prints and some originals to many equine-related charities, including Old Friends, After the Finish Line, Race Track Chaplaincy of America, and the National Disaster Search Dog Foundation. After 9/11, Fred Stone painted a portrait of a rescue dog being held by a firefighter, raising $500,000 for the families of firefighters who died saving others on 9/11.

“I have been fortunate,” Stone said in an article in BloodHorse in 1990. “I made my career from horse racing and I want to share that with others.”

In 2012, he painted a wonderful portrait of Hickstead, the famous show jumping mount of Eric Lamaze that competed at the 2012 Olympics following the horse’s unexpected death. The funds received from the sale of the poster supported the Canadian Equestrian Team.

Fred Stone also wrote a book, detailing his life’s work with over 60 color photographs of his best paintings. Fred Stone goes into detail about his creations, as well as sharing the stories of the horses he painted.

In  lieu of flowers, his family would appreciate donations made to the thoroughbred retirement facility Old Friends in Georgetown, KY.

All images are subject to copyright.