I ‘m excited that Horsefly Films contacted me and I decided to do  this post on their up-coming Film, Talking To The Air: The Horses Of The Last Forbidden Kingdom  and an interesting  equine painting called ” LUNG-TA”, which is a triptych.  I am also going to show you some of their other amazing  films and photography!! Two of their films,  Talking To the Air and Tarpan: Repainting An Ancient Picture will be at the Equus Film Festival  November 21 and 22!! (If you didn’t see my post on the Film Festival, you can at this link:  https://artofthehorse.wordpress.com/2014/10/14/equus-film-festival-nyc-november-21st-and-22nd)

Whatever your equestrian business, using films to show people your horses in action is vital and compelling part of equine marketing as well as an indispensable way of setting your website apart. Showing your potential clients that you are serious about your horses means creating a campaign to promote them at their best.

Horsefly Films filmmaking and photography services have been successfully promoting horses and ranches worldwide for over seven years. We create spectacular, beautiful, photographs and film images of your horse that challenge and inspire the viewer.

A truly great film should convey the dramatic & emotional essence of the horse and elevate them to living, breathing, moving works of art.

We have keen intuition for getting the most cinematic footage in a style to suit your horse or farm. We shoot, edit, design and deliver DVD videos or Blu-rays with professional sound mixes, titling and label design as well as pretty much any web/iphone/ipad/doodad version you might need.

Together we have over twenty years in the Hollywood film industry as professional award-winning filmmakers, videographers, writers, producers and editors. We are also accomplished horsewomen. Your horses are in good hands!

LUNG-TA: The Windhorse, is a collaboration of art, music, and dance, premiered to standing room only at the University of the Arts in Philadelphia on March 6th, 2009. The impetus for the collaborative and the imagery for its visual component – the LUNGTA Triptych – springs forth form from that sublime altar of the earth that is the Himalaya—the Abode of the Gods, and from an artistic response to the global impact of accelerating change on its remarkable cultures.  It was for purposes of gathering research for this project, that eminent Philadelphia composer, Andrea Clearfield, and Maureen Drdak traveled to the remote mountain kingdom of Lo near the Tibetan border in late summer 2008.

The idea central to the film “Talking to the Air” is that the horse is pivotal to the cultural and physical life of Lo; it is the seminal symbol of both wealth and virtue.  The notion of Lung-Ta is multivalent in depth, flexibility, and relevance; it exists conceptually on dual planes of both the metaphysical and the vernacular – the universal and the personal – the eternal and the temporal.   Lungta, the Windhorse, combines the Tibetan words ta (horse) and lung (breath; wind).  Lungta lends its name to the Tibetan or Buddhist Prayer Flag and also to a more subtle concept; that of the Mind riding upon the Spirit, as a Horseman rides upon a Horse.   Inspired by her travels in the Kingdom of Lo, Nepal, Maureen Drdak created the Lung -Ta Triptych, modeled in form upon the iconic Lungta prayer flags, and painted with the very sacral clays of the Kingdom of Lo.  Maureen created a symbiotic evocation of ethereal cloud shapes (lung) and the equine form in motion (ta).

More information about Maureen Drdak can be found here – http://www.maureendrdak.com/ and she has a whole essay written about the Lungta triptych here http://asianart.com/articles/lungta/index.html.

The painting is for sale for $15,000 and can be purchased on the crowdfunding page for the film (at the very bottom) here – http://www.seedandspark.com/studio/talking-air-horses-last-forbidden-kingdom?snstoken=MTM2NzFfNTI0MV9UVw== There are seven days left!

Here is some of their photography….. and a few of their films below:) 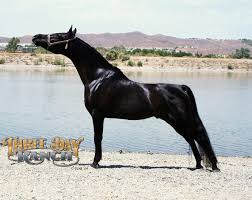 A few of their other films…

“The Skyrian Horse  is believed to be one of the rarest  and oldest breeds in the world, with unique DNA. Originating in Skyros, Greece, these little horses have something so special that they capture the hearts, minds and imaginations of all who have the opportunity to meet them. Although technically a pony, standing between 10 and 11.1 hands high, their conformation and surprising grace of movement aptly ensures that they are called a small horse. Only about 200 of these living pieces of history are left today. S.I.H.T, based in Skyros, is the home of 37 of these horses and was founded to create a safe and secure place for the Skyrian horse to thrive, to increase the quality of the breed and to raise its profile internationally. ”

“These horses are  an extremely rare  breed that must be preserved, and at the same time we do not want to breed indiscriminately and potentially cause welfare issues for these horses in the future. That is why over the last two years we have made the decision not to breed. Instead we have focused on caring to the best of our abilities for the horses we have, developing links with other organisations involved with Skyrian horses and animal welfare, raising the profile of the Skyrian Horse in the international community, continuing and developing   our work with animal welfare and fostering interest in the Skyrian horses for therapeutic work, equine assisted learning, and driving.”

For more information on these horses and the film, visit http://skyrosislandhorsetrust.com

“This is the story of mankind’s attempt to bring back a horse from the dead.  Tarpan had roamed in wild herds across Europe for millennia, running through the dreams of our ancient ancestors and onto prehistoric cave walls.  The film takes us on a journey of discovery, illuminating the dark past of the hunting lodges of Europe, miraculous scientific coincidence and the chilling efforts of the genetic breeders of the past.  World Wars and doomed attempts to re-engineer the horse left a hopeless situation.  Finally the careful work of an international group including the Polish State Studs, the work of biologists in the Netherlands and the tireless efforts of a dedicated group in Bulgaria brought a small herd of modern Tarpan to the remote mountains of Eastern Europe.  Here the horse faces a whole new challenge, struggling to become wild once again and bravely learning to find a way back to their ancient selves.  The repainting of this ancient picture will depend on their ability to adapt to a thriving wolf population.  Their future still hangs in a delicate balance.”

Hope you all enjoyed seeing some of Horsefly Film’s great stuff! I know what films are going to go on my “Movies to Watch” list-hope they go on yours too!