This must be the week of exciting new sculptures! First, we have the Nazi “Walking Horses” , a pair of horse sculptures that that were just discovered days ago, after being stolen for 26 years! Now a 65′  high, white marble statue covered in 24 carat gold leaf that was just unveiled yesterday! (5/25/15)

Turkmenistan’s leader, Gurbanguly Berdymukhamedov, had a 65′  monument of himself riding a horse cast in bronze and covered in 24-carat gold leaf. The statue was placed on a  of white marble cliff-like base.

This new gold  monument also resembles “The Bronze Horseman”. It is an equestrian statue  of Peter the Great in Saint Petersburg,  the second largest city in Russia. It was made during  1768 – 1782 and placed on top a marble base, much like the gold monument in Turkmenistan.

The Bronze Horseman pedestal is the enormous Thunder Stone, the largest stone ever moved by man. The stone originally weighed about 1500 tons, and was carved down to 1250 tons during transportation to it’s current site. 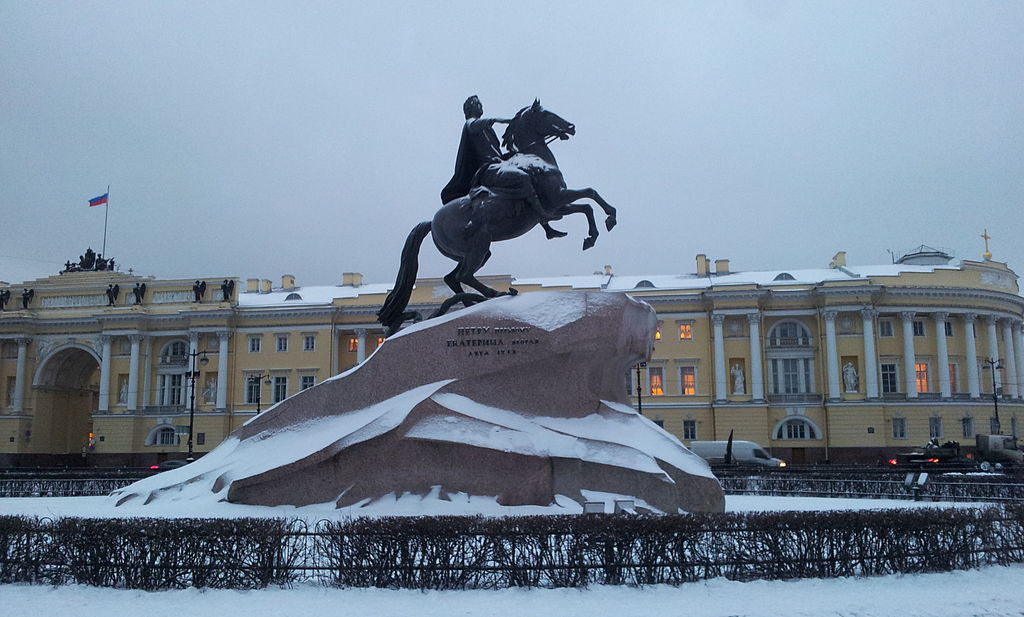 The Bronze Horseman was camouflaged so that the Germans would not try to bomb it during World War II.

A 19th-century legend states that while the Bronze Horseman stands in the middle of Saint Petersburg, enemy forces would not be able to conquer the city. During the 900-day Siege of Leningrad (Leningrad being the city’s name from 1924–1991) by the invading Germans, the statue was covered with sandbags and a wooden shelter. With the protection, it survived the bombing and artillery virtually untouched. True to the legend, Leningrad was never taken.

~Poem of The Bronze Horseman~

The Bronze Horseman is the title of a poem written by Aleksandr Pushkin in 1833. It was considered to be one of the most significant works of Russian literature. Due to the popularity of his work, the statue came to be called the “Bronze Horseman”. A major theme of the poem is conflict between the needs of the state and the needs of ordinary people.

In the poem, Pushkin describes the fates of the poor man Evgenii and his beloved Parasha during a severe flood of the Neva river. Evgenii curses the statue, furious at Peter the Great for founding a city in such an unsuitable location and indirectly causing the death of his beloved. Coming to life, the horseman chases Evgenii through the city. The poem closes with the discovery of the young man’s corpse in a ruined hut floating at the edge of the river.

In 1903 the artist Alexandre Benois published an edition of the poem with his illustrations, creating what was considered a masterwork of Art Nouveau. (Photo of one of the illustrations above)

The poem has inspired works in other genres  as well: Reinhold Glière choreographed a ballet based on it and Nikolai Myaskovsky’s 10th Symphony (1926–7) was inspired by the poem.

In a travelogue about Petersburg in 1821, the French statesman Joseph de Maistre commented that he did not know “whether Peter’s bronze hand protects or threatens”.

Here are a few paintings depicting The Bronze Horseman~

I learned a lot and enjoyed making this article! Hope you all learned something new!