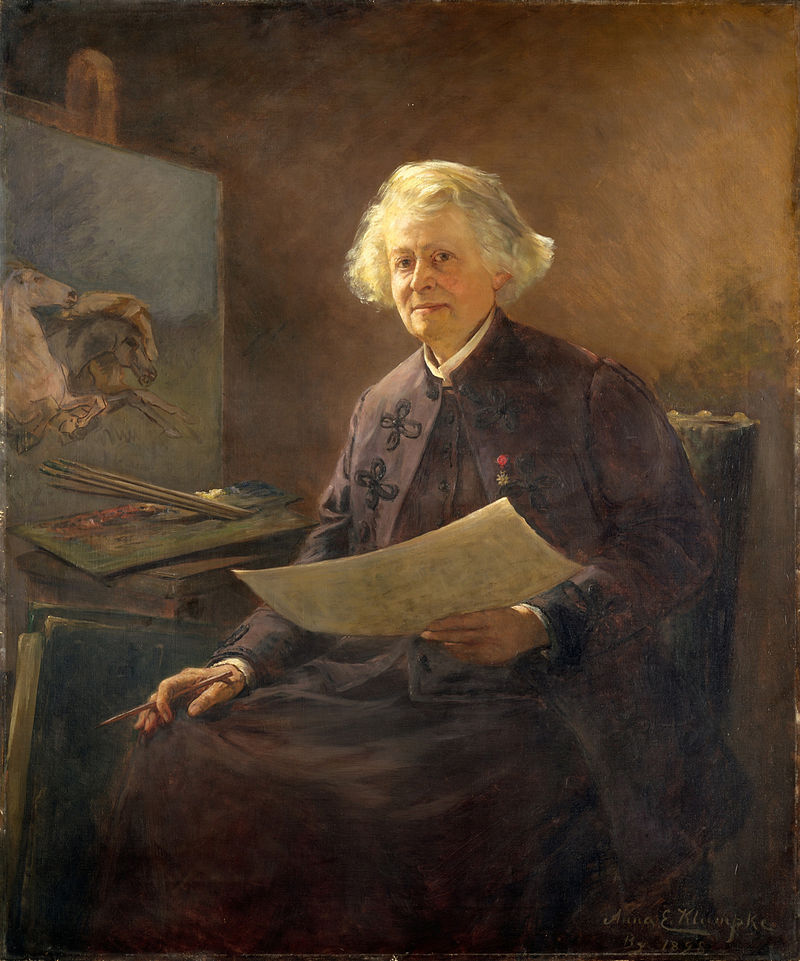 One of the most famed and exquisite painters of the 19th century was  that of french animal painter Rosa Bonheur. For many, that name brings back memories of staring in wonder of the large, history-making painting, “The Horse Fair”, painted in 1852–55 in the Metropolitan Museum Of Art in New York. None of her other paintings have ever reached quite the height of fame that this marvelous painting did, that is beloved by people in the States and across Europe. Not only was Rosa an animal painter, but she was also one of the few women painters to gain international fame in the 19th century. She captivated her audience in many ways that most female painters before and for a period of time after did not achieve, making her one of the most original figures in art of that time.

Born in 1822 to an artistic family, with four siblings in the arts as well, Rosa began her journey of an artist when she was 13. Most art schools did not accept women in that time, so she studied under the instruction of her father, who believed in equal rights for both sexes. Her father was involved with groups that wanted to have equal rights for all and remove the classes that society had labeled people. His association with this group contributed to Rosa’s  outlook and defiant personality leading to her dress a man, cutting her hair short, and smoking cigarettes and cigars much to the disdain of and the misunderstanding of many. Her actions and personality placed her in a decisive position in early feminism. She wrote that “To my father’s doctrines I owe my great and glorious ambition for the sex to which I proudly belong and whose independence I shall defend until my dying day.” She had to get a  permit from the Paris police to be able to dress that way, saying that is was necessary for her to look that way when going to the slaughter houses to study the animals, particularly horses, that she painted.

If male clothes were both practical and acceptable, they were to her taste. “As far as males go, I only like the bulls I paint,” she remarked on one occasion.

Before studying art, she tried and failed to go to boarding school, and then to apprentice to be a dressmaker. When she started to study art, she would do the traditional student work of copying engravings, drawing still life and going to the Louvre and copying the masters of art.

An interesting part of her early art studies was went she would work with her siblings and father in their artist workshop, working on commissions together. Though it had went out of style years before, her father, Raymond continued the tradition of the family workshop, where the family members would work together. His orders for commissions came more and more and in order to meet the demand for his works, he began to employ his children’s assistance to complete the commissions. From this point, the Bonheur children established their own artistic careers but continued to assist one another in their family business.

From her beginning as an artist, Rosa was mostly interested in painting animals and the rest of the natural world. Her first exhibit was at the Paris Salon in 1841. This began a long list of her works that where exhibited at the Salon. By the time she was 23, Rosa had already exhibited eighteen works at the Paris Salon. Early in her career, she had also exhibited sculptures at the Salon, though she decided to not continue making sculptures, as her brother, Isidore, was a gifted sculptor and Rosa did not want to overshadow him.

It was in 1851 when she started the painting that would give her international success. “Le Marché aux Chevaux “, known to many as “The Horse Fair”. The painting was submitted to the Salon in 1853. A very interesting fact about The Horse Fair is that one version of the painting, currently is in The National Gallery in London, was first created by her long time friend and lover, Natalie Micas, then finished by Rosa.

In her book entitled Rosa Bonheur: With a Checklist of Works in American Collections, Rosalia Shriver describes the monumental nature of this painting:

When it was finally finished and exhibited at the Salon of 1853, its creator was only 31 years old. Yet no other woman had ever achieved a work of such force and brilliance; and no other animal painter had produced a work of such size.-Rosalia Shriver, Rosa Bonheur: With a Checklist of Works in American Collections

Surprisingly, Rosa found her fame rather distressing. in 1859, she left Paris and moved to By, France. Later,her lover Anna Elizabeth Klumpke (34 years her junior) moved in with her for the last year of her life.  She also opened her home to others during the Franco-Prussian War of 1870-71. Rosa continued to work  on sketches, paintings, and commissions for the next forty years. She left everything she had to  Anna Klumpke. Anna went through her studio and found 892 paintings and several boxes of drawings, all sorted and dated after Rosa died. The items were sold shortly after her death, grossing over 2 million francs, a huge sum at the time. Her brother, Isidore Bonheur, tried to sue and start a legal battle with Anna in order to get some of Rosa’s estate and belongings, which he failed to accomplish.

A later discussion of Rosa Bonheur by Paul-Louis Hervier in the 1908 La Nouvelle Revue (magazine)  wrote that Rosa was:

Simple, welcoming, of an extreme frankness, she was loved by all; because of her good heart, her generosity, her simplicity, which were not studied but spontaneous, she acquired the well deserved reputation of a beneficent fairy.

The Met ( Metropolitan Museun Of Art) featured “The Horse Fair” in one of their Artist Project Videos, which you can see below. The Artist Project is  “a 2015 online series in which we give artists an opportunity to respond to our encyclopedic collection.”

Below are several photos of Rosa’s brother’s equine sculptural works, Isidore Bonheur.
He was born on the 15th of  May, 1827 and died on the 10th of November, 1901.

On May 25th of this year, it will be 117 years since Rosa’s death. She was truly a legend in her own time.