Happy St. Patrick’s Day! Here is an interesting and intriguing statue in Dublin, Ireland that I think you will like!

John Byrne was commissioned by Breaking Ground, the Per Cent for Art,  to create a piece of public art for the area’s town center. In a short film of the making of Courage, Byrne explains he was interested in making a different kind of sculpture then the military sculptures found in squares and towns across across the world , which invariably feature military men astride horses. “These things are commonplace in European towns and cities – nearly always men military men the great and the good as it were, but of course one person’s hero is another’s tyrant,” Byrne says.

Back in 2007 open auditions were held in Ballymun,Ireland, to find a teenager between 13 and 18 who had a  love of horses. Eventually, 20 teenagers were photographed on horseback. 17-year-old Toni Marie Shields was chosen. She was scanned using state-of-the-art 3D software to make a mold for the work. Her mold and the mold from the model of the Gough monument horse were then combined to make the bronze sculpture. A soft green patina applied at the end of the process gives the work an antiquated feel and the effect is of a sculpture straight out of the 18th century. “Ah, it’s lovely but it’s huge,” was Toni-Marie’s response when she first saw herself in bronze, one-and-half times life size. The work, was be placed on a hand-carved stone plinth just inside the gates of Trinity Comprehensive School in Ballymun and was relocated to Main Street when the Metro rail project was completed. 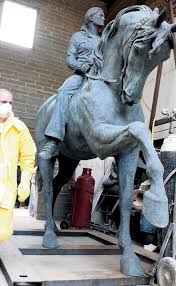 Check out this great video on the making of the Courage monument! For Email followers: If the video box or link does not appear on the email version, come to the home page of The Flying Shetlands. I’ve had problems with videos on the email versions before and just wanted to let you know! https://www.youtube.com/watch?v=SZfFOhAwxK4#t=134

Dublin was once famed for its high quality equestrian statues, including the Lord Gough monument in the Phoenix Park, the William of Orange statue in College Green and the King George II statue in St Stephen’s Green. Not many statues of people on horseback remain today, as the IRA has since blown the older ones up.

Winston Churchill recalled in his autobiographical work My Early Life 1874-1904, that his earliest memories from childhood were set  in Dublin. Asking “when does one first begin to remember?” he went on the write about the unveiling of the  imperial war hero Lord Gough at the Phoenix Park in Dublin in 1878. Churchill spent some of his earliest years in Dublin where his Grandfather had been appointed Viceroy and employed Churchill’s father as his private secretary. Churchill’s earliest memory was of his grandfather unveiling the doomed statue.

A great black crowd, scarlet soldiers on horse-back, strings pulling away a brown shiny sheet, the Old Duke, the formidable grandpa, talking loudly to the crowd. I recall even a phrase he used: ‘And with a withering volley he shattered the enemy’s line.’ I quite understood that he was speaking about war and fighting and that a volley meant what the black-coated soldiers (riflemen) used to do with loud bangs so often in the Phoenix Park where I was taken for morning walks.

The time of  the monument of Lord Gough’s in the park came to an abrupt end. in 1957, the IRA blew up the statue. It is a well-known Dublin story, but it’s often forgotten there had been at least five other attempts on the statue prior to the final attack.

In a 1969 article on Dublin’s vanishing statues for The Irish Times, John Armstrong wrote that the Gough statue was often praised, stating that “The Gough was, from all accounts, the finest piece of work in the country and reputedly one of the finest equestrian statues in Europe.”

Lord Gough’s head was then sawed off of the statue on Christmas Eve 1944. There was article by Myles na gCopaleen in early January 1945. In it, Myles wrote:

Few people will sympathize with this activity; some think it is simply wrong, others do not understand how anybody could think of getting up in the middle of a frosty night in order to saw the head of a metal statue.

Myles went on to write:

The Gough statue in question was a monstrosity, famous only for the disproportion of the horse’s legs, its present headlessness gives it a grim humor and even if the head is recovered, I urge strongly that no attempt should be made to solder it on. After some time, Lord Gough’s head was  found in the River Liffey, at Islandbridge, Dublin. Later, years after it was blown up by the IRA, the sculpture was restored in 1990 and now stands in London, England.

~Courage and The Gough Monument~

John Byrne was aware of John Henry Foley’s bronze horse (the original artist) used in the Gough Memorial in the Phoenix Park. After contacting the owner of the restored bronze sculpture, he and his team traveled to London to copy the horse to use for  his Courage sculpture. A great way to bring back part of Dublin’s history to Dublin!

Here are two other horse sculptures in Dublin!

Have a happy St Patrick’s Day! Hope you learned something new about Dublin’s equestrian artwork!