Cyrus Edwin Dallin was born on November 22, 1861 in Springville, Utah. His sculpting and artistic talent was recognized at an early age, and he was sent to Boston at 19 to study with T.H. Bartlett. Today he is regarded as one of the most important sculptors in American art.

Dallin found the road to success rocky. But his perseverance and dedication are revealed in his efforts to complete whatever he started. A telling testament to Dallin’s tenacity is his 58-year trial to get an equestrian statue of Paul Revere funded and fabricated. After seven versions, Dallin’s statue was erected in 1940 in Boston’s historic North End.

In 1891, Dallin married the writer, Vittoria Colonna Murray. The couple raised three sons. During this time, Dallin actively pursued commissions, exhibited, and won many prizes. Stable income to support his family came from teaching appointments, chiefly at the Massachusetts Normal Art School (Massachusetts College of Art and Design), from 1900-1941.

Dallin gained the respect of other famous artists of his day, including Augustus St. Gaudens and John Singer Sargent, who became a close friend. (Sargent’s sketch of Dallin’s Portico is a treasured item in the Museum’s collection.) Dallin’s art was reproduced and collected on a broad scale. Among his most beloved works are his monuments of Native Americans, which changed the face of public art in America.

In 1900, at the age of 39, Dallin moved to Arlington, Massachusetts, where he lived and worked for the rest of his life. As a result, Arlington is now the home for many of his works. Dallin died at his own home on November 14, 1944, a week shy of his 83rd birthday.

The mission of the Cyrus Dallin Art Museum is to advance the legacy of the celebrated American sculptor, Cyrus E. Dallin, who lived and worked in Arlington, Massachusetts, by collecting, preserving and exhibiting items related to the artist’s life and work, and by serving as a vital educational resource for the community of Arlington and beyond~

Appeal to the Great Spirit

Appeal to the Great Spirit portrays a Sioux chief, defeated by the US Army, engaged in prayer. Dallin first envisioned a three-figure composition, but fellow sculptor Daniel Chester French suggested simplifying it. Monumental bronze versions stand in front of the Boston Museum of Fine Arts as well as in Muncie, Indiana, and there is a posthumous casting in Tulsa, Oklahoma. By the 1920s, the Appeal had become one of many American sculptural icons by Dallin, and remains so today. It was widely reproduced, but few reproductions were authorized, and Dallin did not benefit financially from them.  Smaller versions of the work are in numerous American museums and the permanent collection of the White House.

Arlington Police recovered Dallin’s equestrian statue of Chief Washakie (  40-inch bronze replica). weighing about   300 to 400 pounds and valued at $10,000,  that was stolen from Cyrus Dallin Art Museum  in the town in the end of May, 2012.

Arlington Police  said  that after detectives called scrap yards throughout the area looking for the distinctive piece, they found and recovered it from a facility in Everett. The statue had not been damaged.

At the 1904 Summer Olympics in  St. Louis, Missouri, Dallin competed in archery, winning the bronze medal in the team competition. He finished ninth in the Double American round and 12th in the Double York round.[ 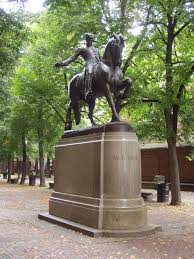 In 1883, he entered the competition for an equestrian statue of Paul Revere for Boston, Massachusetts. He won the competition and received a contract, but four versions of his model were rejected. The fifth version was accepted in 1899, but fundraising problems delayed the project for decades. The full-size statue was unveiled in 1940.

Hope you enjoyed today’s post of Cyrus’s sculptures and his museum! If you are in the New England area (USA), be sure you stop by and see his art ~