For today’s featured artist, I have decided to show you Eadweard Muybridge’s photography, who’s work has helped artists for over a century in depicting the horse at  trot, canter or gallop correctly and solving the question, if all four legs were off the ground at the same time during these gaits. April 9th would have been his 185th birthday this year.

Born/Died In: Kingston upon Thames, England 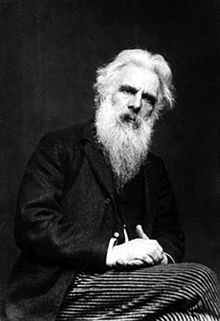 By 1860, Muybridge was a successful bookseller. He left his bookshop in care of his brother, and prepared to sail to England to buy more antique books. However, Muybridge missed the boat and instead left San Francisco in July 1860 to travel by stagecoach over the southern route to Saint Louis, by rail to New York City, then by ship to England.

In central Texas, Muybridge suffered severe head injuries in a violent runaway stagecoach crash which injured every passenger on board, and even killed one of them. Muybridge was thrown from the stagecoach , and hit his head on a rock. He was taken 150 miles to Fort Smith, Arkansas for treatment where he stayed three months, trying to recover from symptoms of double vision, confused thinking, impaired sense of taste and smell, and other problems. He next went to New York City, where he continued in treatment for nearly a year before being able to sail to England in 1861.

When he returned to England, and took up professional photography, learning the wet-plate collodion process. He went back to San Francisco in 1867, and in 1868 his large photographs of Yosemite Valley made him world famous. Today, Muybridge is known for his pioneering work on animal locomotion in 1877 and 1878, which used multiple cameras to capture motion in stop-motion photographs, and his zoopraxiscope, a device for projecting motion pictures that pre-dated the flexible perforated film strip used in cinematography.

In 1874 he shot and killed Major Harry Larkyns, his wife’s lover, but was acquitted in a jury trial on the grounds of justifiable homicide. He traveled for more than a year in Central America on a photographic expedition in 1875.

He had one son with his wife , Flora  Shallcross Stone. While Muybridge was in Central America, she died in July 1875 a few months after they  divorced. She had placed their son, Florado Helios Muybridge, with a French couple. In 1876, Muybridge had the boy moved from a Catholic orphanage to a Protestant one and paid for his care, but otherwise had little to do with him. Later,  he was put to work on a ranch as a boy, he worked all his life as a ranch hand and gardener. In 1944, Florado was hit by a car in Sacramento and killed, at approximately the age of 70 with no children.

In the 1880s, Muybridge entered a very productive period at the University of Pennsylvania in Philadelphia, producing over 100,000 images of animals and humans in motion, capturing what the human eye could not distinguish as separate movements. He spent much of his later years giving public lectures and demonstrations of his photography and early motion picture sequences, traveling back to England and Europe to publicize his work. He also edited and published compilations of his work, which greatly influenced visual artists and the developing fields of scientific and industrial photography. He returned to his native England permanently in 1894, and in 1904, the Kingston Museum, containing a collection of his equipment, was opened in his hometown. He then died on May 8th, 1904 in Kingston from prostate cancer. 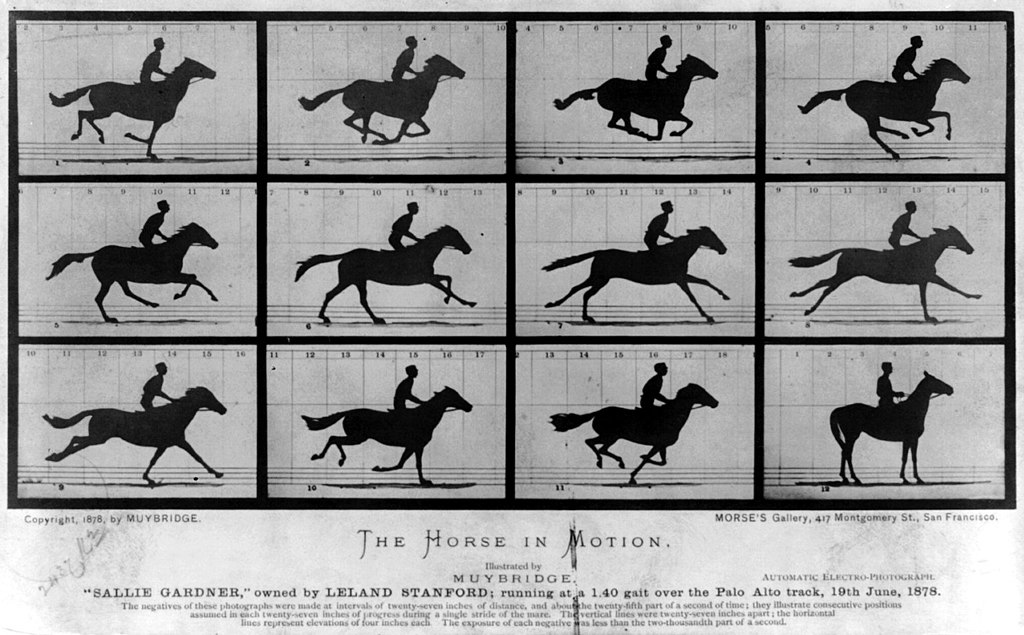 In 1872, Leland Stanford, a racehorse owner and the former governor of California, hired Muybridge to settle the popular debated question — whether all four feet of a horse were off the ground at the same time while trotting. that same year Muybridge began experimenting with 12 cameras photographing a galloping horse in a sequence of shots. His efforts seemed to prove that Stanford was right, but he didn’t have the process perfected. The same question had was also asked about horses during a gallop. The human eye can not break down the action at the quick gaits of the trot and gallop. Up until that time, most artists painted horses at a trot with one foot always on the ground and at a full gallop with the front legs extended forward, the hind legs extended to the rear, and all feet off the ground. This helped artists tremendously in accurately depicting horses moving. Today, artists still look at his work to help them. He has definitely made a lasting impression, even for generations to come.

Just a few days ago, a beautiful quilt with  Muybridge’s images sewn on in sparkly colors has gone up for sale. Animator Nina Paley came up with the idea for the quilt and the design. She collaborated with Chris Carlson, who came with the quilt  patterns, while Theodore Gray looked after the stitch-coding and binding.

The stitching was done on a Quilt Master IV full-frame quilting system, stiching 1500 stitches a minute. What I could do with one of those!:)

The project team created an animated sequence of the actual panels to prove that Muybridge’s work has been faithfully recreated in the quilt.

The quilt is available from Theodore Gray’s store for US $750. The high-loft quilt is 94 inches square, and is said to be suitable for display on a wall or for use on a queen or king-sized bed.

A tribute to Eadweard Muybridge’s famous horse-in-motion photographic knitted  experiment was created last year (March, 2014)  by British artist and videosmith Sam Meech.
The Knitted Horse Firework is a knitted animation, created for the exhibition ‘Crystallize – New Media Art Lab Korea & UK’, which featured artists from Korea and the UK, exploring how contemporary artwork is expressed through science, IT, social media and cinema.

It was developed as part of Meech’s Knitting Digital research project.

On April 9th, 2012 Google  marked the 182nd anniversary of the birth of ground-breaking Eadweard J. Muybridge with a horse doodle.

The search engine’s April 9 doodle comprises a stylised Google logo depicting the most famous of Muybridge’s work, a series of images which proved that, at one point in a horse’s gallop, all four feet are off the ground.

I hope you all enjoyed seeing some of Eadweard Muybridge’s famous work and newer art that honor’s his discovery!  One of the other pioneers is equine art was George Stubbs. He dissected horses to be able to paint the muscling of the horse correctly. I will be featuring him in the near future.

Come back every Tuesday and Friday to see more fabulous equine art!
Shya