You can see different types of  World War II bunkers around the world, but I think there is only one place you can find bunkers that have been turned into works of equine themed art. The Danish West Coast is where numerous abandoned  World War II bunkers remain on the beach and in the dunes.  To celebrate the 50th anniversary of the liberation of Denmark, a number of bunkers were converted to “mules” by the artist Bill Woodrow in 1995.  Apparently, they symbolize the evil being dragged away from the beach towards the sea.

Woodrow writes: “The sculpture consists of concrete bunkers along the beach at Blåvand-Oksby, Denmark (part of the Atlantic Wall), mounted with horses’ heads and tails cut from steel. Depending on the tide, the sculptures are either on the shore or in the sea.” Kinda like The Rising Tide sculptures in London.

Bill Woodrow was born in 1948 near Henley, Oxfordshire, UK and now lives  and works in London and Hampshire. He has studied  Winchester School of Art, St. Martin’s School of Art and 1971-72 Chelsea School of Art and has had many solo and group exhibits across the world since 1972. 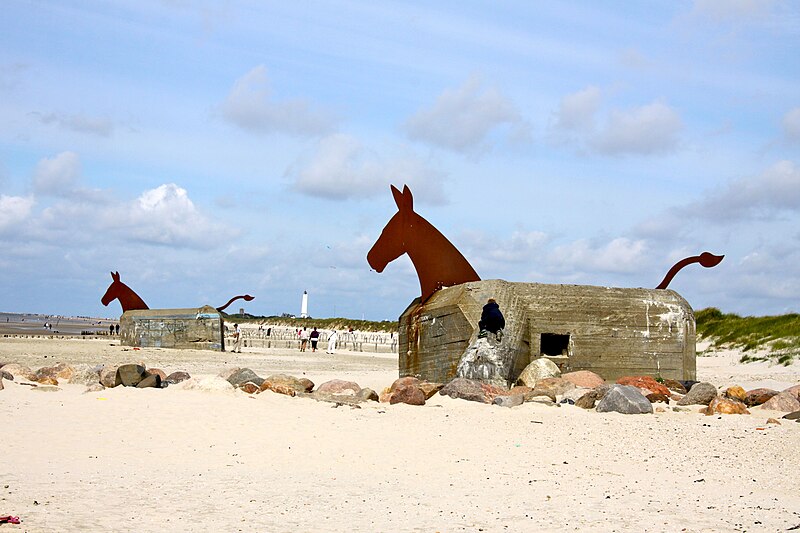 I hope you enjoyed and learned something new about one of the world’s historic wars. I bet the soldiers that were there at the time the bunkers were built never thought that they would be turned into mule sculptures!